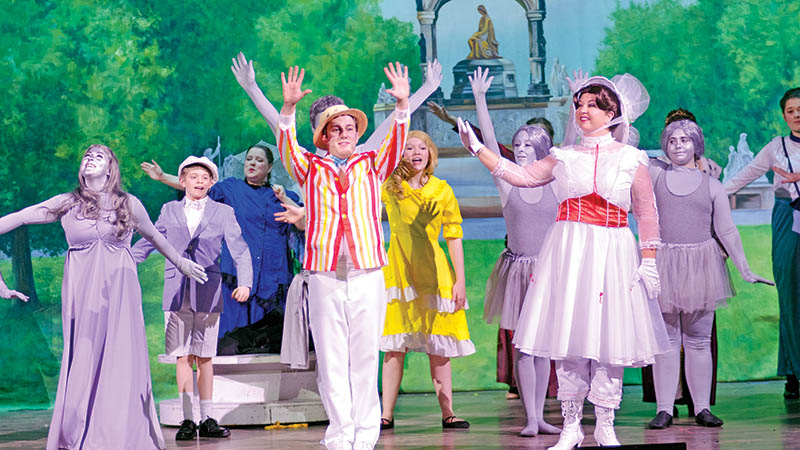 Michelle Grubb stars as the titular character and Thaddeus Stambaugh is Bert in the Paramount Players production of “Mary Poppins.” (The Tribune/Heath Harrison)

ASHLAND — For the past three days, members of the Paramount Players have been putting on a show that is “supercalifragilisticexpialidocious.”

The performing company of the Paramount Arts Center has been bringing their adaptation of “Mary Poppins” to audiences at the theater, located on Winchester Avenue in Ashland.

The show features a cast of 72 and is based on the 1964 Disney adaptation of the book series, featuring music by the legendary, prolific songwriting duo The Sherman Brothers.

Taking the titular role portrayed Julie Andrews in the film is Michelle Grubb, while Thaddeus Stambaugh will be playing Bert, a role made famous by Dick Van Dyke.

Public performances began on Friday, but, first, the cast and crew staged a show for students.

“We started with the local schools,” Melanie Cornelison-Janotta the director of the production said.

A veteran of such duties, she said it usually takes about eight weeks to ready a show the size of this one.

“We’ve been rehearsing since Jan. 8,” she said.

The production also features more elaborate sets then a typical Paramount show, with a multi-level construction for the Banks home.

“It’s our largest one yet,” Cornelison-Janotta said.

She said that the show will also include several members of the cast who are from Lawrence County, including Gary Morgan, of Ironton, who portrays Admiral Boom, and Alexandra Wilson, a member of the ensemble chorus.

Performances for today are scheduled for 3 p.m. and 7:30 p.m. For more information, visit www.paramountartscenter.com.