The Voice of the Convo: Horvath calls out ‘Basketball 30’ 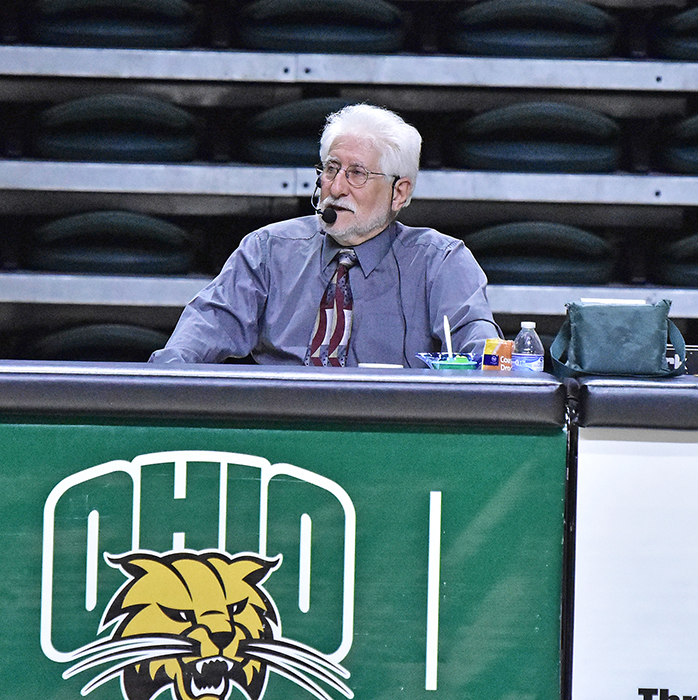 ATHENS, OH — There is an energy that fills the Ohio University Convocation Center during the high school basketball tournament games.
Being part of the tournament provides the electricity, but it is “The Voice of the Convo” who flips all the circuits.
Lou Horvath has been the iconic public address announcer for nearly 20 years as the Convocation Center has served as the home to the district and regional tournaments. And the most recognizable tradition is when Horvath tells the crowd not to look at their watch or any clocks, because at the Convo, “It’s Basketball 30.”
Horvath started doing games in the Convocation Center in the late 1990s. Alexander High School had a hoops classic that began at 9 a.m. with the last game tipping off at 9 p.m.
“We did like eight games in a row,” said Horvath.
Wayne Horsley took over as the high school district and regional basketball tournament director at Ohio University 19 years ago.
“When Wayne took over, I came on then and I’ve been doing it,” said Horvath. “And since that time, I’ve been doing men’s and women’s basketball and volleyball for OU. I’ve also picked up soccer and football for OU as well.”
And with this the 50th anniversary of the opening of the Convocation Center, Horvath couldn’t help to joke that “So, I’ve been doing things here for a while. I’m almost as old as the Convo.”
Horvath got his start innocently by doing junior high soccer games for his son’s soccer games since there was no one who volunteered to handle the duties.
“I worked for Social Security and I did the public information, so I did seminars and radio and TV spots and magazine things. I was used to talking to people,” he said.
“After doing those things, I started doing sectional (basketball tournament) games at Alexander because we held them at that time. I did a couple of football games and then they started having me over here.”
Before the game begins and his famous “Basketball 30” catch phrase, Horvath asks the crowd to stand for the playing of the national anthem, reminding everyone of the freedoms that they enjoy living in this great country.
Horvath stands like everyone but at the conclusion he salutes the flag. This comes from a man who spent 18 months in Vietnam from 1968 to the early 1970s.
Horvath is proud of his service to this country and he said his catchphrase came from that experience.
“In Vietnam, you say it’s beer 30. It’s just a natural progression to say it’s basketball 30. I started doing that at sectional games at Alexander. I’d say, ‘What time is it? It’s basketball 30.’ I heard somebody is using that. I said, ‘Now wait a minute! You can’t.’ There’s only one place that works and that’s here and Alexander,” said Horvath.
“It was difficult (coming back to the United States). For a lot of people, it was a difficult time. For us, there were times where we had no idea who to talk to because nobody wanted to talk to us. But those times are passed.”
After his time in the military, Horvath returned to Ohio University and got a Master’s degree in Sociology.
“I like living in Athens and the Athens area,” said Horvath.
“I’m a dinosaur. I kept the same job at the same location for 40 years although I had a number of different positions there. I retired 12 years ago. This is fun. This is an avocation. This is a treat.”
When Horvath isn’t behind a microphone at a game, he’s still gets behind a microphone strumming a guitar and singing as a member of a rock and roll cover band called Backwords.
“We had a gig tonight, but luckily we canceled. It was the first time in 35 years we canceled a gig. Our drummer had the flu. We play old rock and roll.,” said Horvath.
Playing in a band, working a job, announcing games are part of Horvath’s life and it seems his M.O. is to do things for long periods of time.
So how long does he plan to announce at the Convo?
“It’s been a ride. It’s been fun. I’ve enjoyed every minute of it. I’ll do it until somebody drags me out of here and turns off the microphone. I plan on doing it forever,” said Horvath.
Once again, The Voice has spoken.