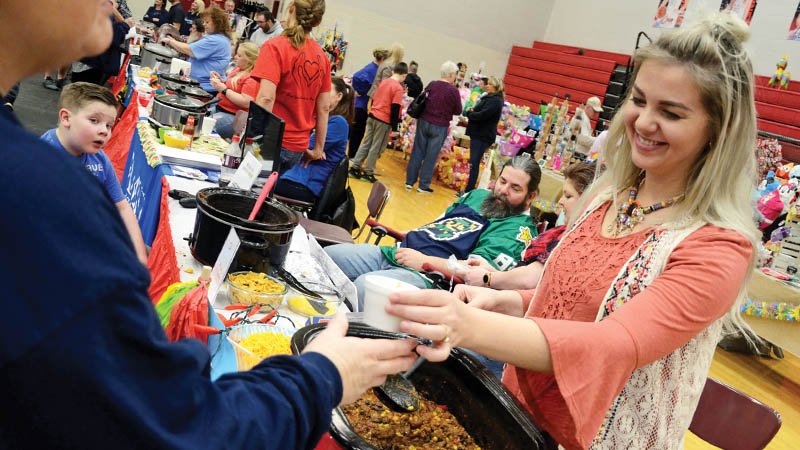 Chili is served up at the Community Home Health Care booth at the 20th annual Lawrence County Developmental Disabilities Chilifest and Craft Show on Saturday at Dawson-Bryant High School. (The Tribune/Heath Harrison)

COAL GROVE — For 20 years, Lawrence County Developmental Disabilities has been serving up chili each spring and helping to raise awareness of issues facing the individuals they serve.

The agency hosted its Chilifest and Craft show at Coal Grove High School on Saturday and attendance was packed, so much that Tim Nunnery, LCDD’s communications director, said they had to move some events, such as the cake walk to another room to accommodate crowds in the gym.

“Everything’s going great,” he said of the turnout, estimating 700 people had attended, as well as the 25 chili vendors and 26 craft vendors set up.

For $1, attendees could purchase a bowl and sample chili from each vendor, whose recipes were set to be judged and honored at the event’s end.

While Nunnery said most funds go toward the next year’s event, he said the bigger purpose is to bring attention to developmental disabilities in the region.

“We have an inclusive crowd, people with and without DD,” Nunnery said. “And we’re thankful for everyone coming out to support what we do.”

In addition to the food, booths were set up where vendors sold crafts, clothing, handmade items and more.

One such booth was Bears for Kaitlyn, set up by Amber Timberlake, of Portsmouth.

She said her daughter, Kaitlyn, 12, was born with a rare genetic disorder and suffers from kidney disease.

She said this was her first visit to the chilifest, where she was selling teddy bears.

“I make all the clothing,” she said of their apparel.

The proceeds from the sales go to Kaitlyn’s care.

“[Making teddy bears is] something I thought of that I can do at home,” she said. Those interested in helping her effort can find the book on Facebook, she said, where they are listed under bears for Kaitlyn.

Timberlake said turnout had been strong and many had shown interest in her booth.

One of the chili booths set up was a first-time entry, from South Point  High School’s On Point Baking and Cooking Club.

“We started this year,” said Tabitha Smith, a teacher and intervention specialist at the school.

She said the students came up with the recipe for the chili and they refined it after offering it to organizers for feedback.

She said the response had been positive and that the event was good for the students.

“We’re trying to get the kids out there and into the community,” she said. “And they’re learning life skills and how to do a budget.”