Thomas taking ‘know how’ to Knights 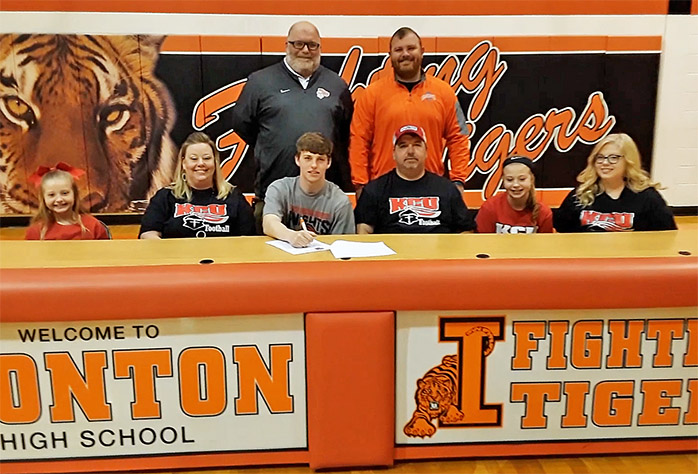 During his high school career, Brycen Thomas has learned the passing game from all angles.
The Ironton Fighting Tigers’ senior has played quarterback and thrown the ball. He has played wide receiver and caught the ball. And, he’s played defensive back and tried to keep the opposing team from completing their passes.
Now, Thomas will get to take his knowledge and experience in the passing game to Kentucky Christian University after signing a letter-of-intent to play for the Knights.
As a receiver, Thomas had 19 receptions for 361 yards and four touchdowns last season. He had 11 receptions for 114 yards as a junior to give him a two-year total of 30 catches for 475 yards.
Besides wide receiver, Thomas played in the secondary and Thomas could play some playing time early for the Knights as a defensive back. Assistant coach Scott Pollock said the position of need is in the secondary.
“We’re really excited to get another kid from this local Tri-State area to come to KCU. We see him fitting in at (defensive back) for us. We’ve got a lot of need in that area. Hopefully, he comes over and shows some of that speed and quickness and is able to strike some people like he did here,” said Pollock.
“We kind of got decimated in that secondary, so with the help of kids like him and Tyson Hall out of Spring Valley over in Huntington and some other kids, we’re hoping for more than just depth out of some of these local guys. We’re hoping to have some guys come in and help us quickly in our scheme. Hopefully, he helps us fast.”
Thomas doesn’t mind the idea of playing defensive back.
“Honestly, I don’t care where I play. I just want to get on the field. Defense, I’d be OK with that. It’s going to take a lot of hard work in the gym. I definitely need to gain weight and get a little faster and I think I can handle it.”,” said Thomas.
“I definitely would like a shot at playing my first year, but other than that, graduate from college and get a good degree.”
The 5-foot-10, 160-pound Thomas has been a three-year starter for Ironton mostly as a wide receiver and defensive back. However, he has handled a few other duties as well.
Thomas was the backup quarterback as freshman and sophomore. He also returned punts.
“I enjoyed (playing quarterback), there’s just a lot of pressure on you. I like the ball in my hands,” said Thomas. “(But wide receivers) score touchdowns so I probably like that the most, honestly. The offense we ran, they just got the ball in my hands and I loved it.”
Thomas also plays baseball and has been a catcher and outfielder the past four seasons, three as a starter. He has also played basketball in the past, but he said his love for football began to grow in later years.
“I like football a little better than baseball and basketball just because I played a lot more baseball when I was younger and I just believe I got burnt out on it,” said Thomas.
“I really started loving football when I got up in high school, you get the big stripe on your helmet and stuff like that. It’s what drove me to play football in college and not baseball.”
Thomas credited his father, Brett, for providing the motivation to work hard to become a good player and student.
“My dad has always been there pushing me through sports when I was younger. It’s helped me out through school and everything,” Thomas said.
After looking at some other school such as Wilmington, Wittenberg and Union, Thomas found KCU to be the perfect fit for him.
“It was close to home and I went on a visit there and I just fell in love with it. The coaches were awesome. I can’t wait to get started,” he said.
Thomas plans to major in education and possibly coach football and/or baseball.