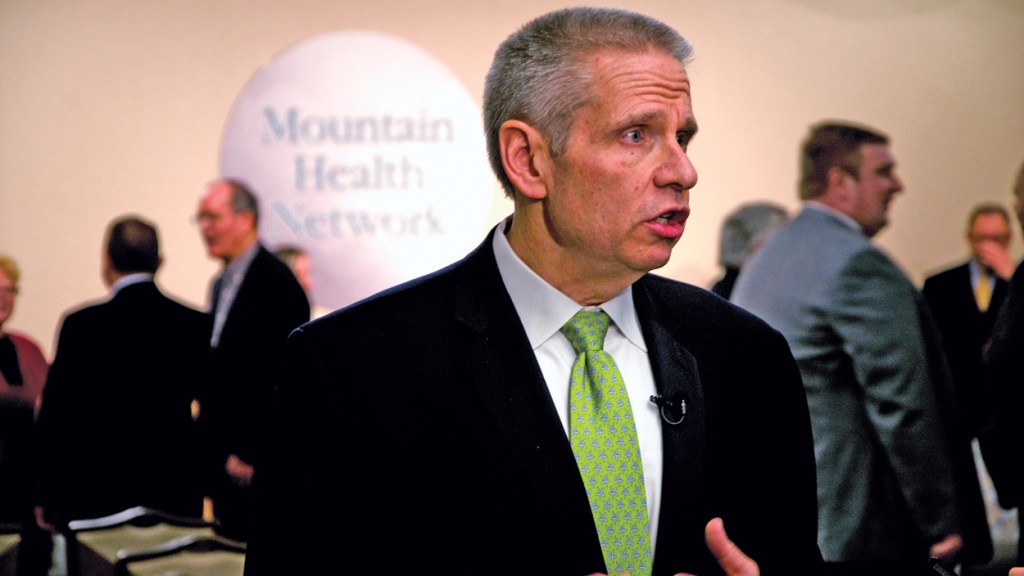 The Tribune/Heath Harrison Michael Mullins, the new president and CEO of Mountain Health Network, speaks at a welcome event at the St. Mary’s Conference Center on Thursday.

Michael Mullins has been in the position since March 4, assuming oversight over the network that includes Cabell Huntington Hospital, St. Mary’s Medical Center and Pleasant Valley Hospital.

Gary White, president and chief executive officer of St. Mary’s, said he was excited to see Mullins, who was chosen in December, take the helm, and said the network will “be the destination for health care in West Virginia” under his leadership.

“This transition is not just good for West Virginia, but for the Huntington metro area.He inspires people to follow his vision and has a passion for listening and teaching,” he said. “He is willing to be bold, to tackle challenges.”

Mullins, who comes to Mountain Health from Ascension Healthcare, a nonprofit Catholic health system, has served as senior vice president of that group and CEO/ministry market executive for Via Christi in Kansas.

He is a retired captain of the Medical Service Corps, the U.S. Naval Reserves and served for 28 years, including in Iraq for Operation Enduring Freedom and Operation Iraqi Freedom.

The Cabell Huntington board of directors adopted the name Mountain Health Network at a board meeting in February, following their acquisition of St. Mary’s.

The two hospitals will continue to operate as separate entities under the network.

Mullins told the crowd, which included officials from both hospitals, as well as government leaders such as West Virginia Attorney General Patrick Morrisey and U.S. Rep. Carol Miller, R-West Virginia, that he believed in a “philosophy of partnership,” which was one of the draws to his new position.

“I’m very pro-physician and very pro-nurse,” he said. “This philosophy of partnership started before I got here and that felt really good.”

He said it was important for the network to adapt to changing times and the “troubled waters of health care.”

“We need to not only survive, but to thrive,” he said, stating hospital officials had told him they expect to be among the top providers in America.

“That was very clear,” he said. “I’m in. That is the right vision and the place to go.”