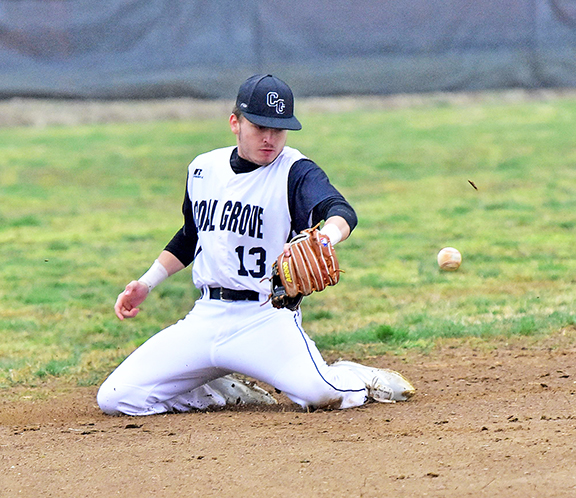 COAL GROVE — This is getting to be a habit with the Coal Grove Hornets. And it’s not a bad habit to have as far as coach Blair Demetroulos can see.
For the second straight game, Coal Grove trailed most of the game and then rallied late to post the win. This time, the Hornets beat the Fairview Eagles 4-3 on Monday.
“We faced adversity again and we overcame it. This says a lot about the character of this team. They get down and they keep fighting. There is no quit in this group,” said Demetroulos.
Fairview (4-2) got all its runs in the third inning on a single by Terrick Smith who went to third on a misplayed sacrifice bunt on a ground out.
The second run scored on a passed ball and an error allowed a third run to score.
Coal Grove (2-0) got a run in the fourth. Colton Sparks walked, courtesy runner Christian Workman stole second and scored on when throw went into centerfield and rolled to the fence.
The Hornets put together the winning rally in the sixth.
Tait Matney and Brady Doyle both singled to start the inning and Ben Compliment walked to load the bases.
A passed ball allowed Matney and Doyle to score and tie the game. Compliment went to third base on the play and Colton Sparks grounded out as Compliment scored the go-ahead run.
Matney and Doyle were 1-3 to account for both Coal Grove hits.
Matney pitched the first six innings for the win. He struck out six, walked one and scattered eight hits. Cory Borders worked the seventh for the save as he struck out one and did not allow a baserunner.
Fairview 003 000 0 = 3 8 1
Coal Grove 000 103 x = 4 2 5
Terrick Smith and Dylan Wamsley. Tait Matney, Cory Borders (7) and Colton Sparks. W-Matney (IP-6.0, H-8, K-6, BB-1, ER-1). Save-Borders (IP-1.0, K-1). L-Smith (K-9, BB-5, ER-1). Hitting-Fairview: Terrick Smtih 1-4, Preston Ledford 2-4, Dylan Wamsley 1-3, Joe Sewell 1-3, Ty Hutchinson 1-1, Jaxson Manning 2-3; CG: Tait Matney 1-3, Brady Doyle 1-3, Colton Sparks rbi.