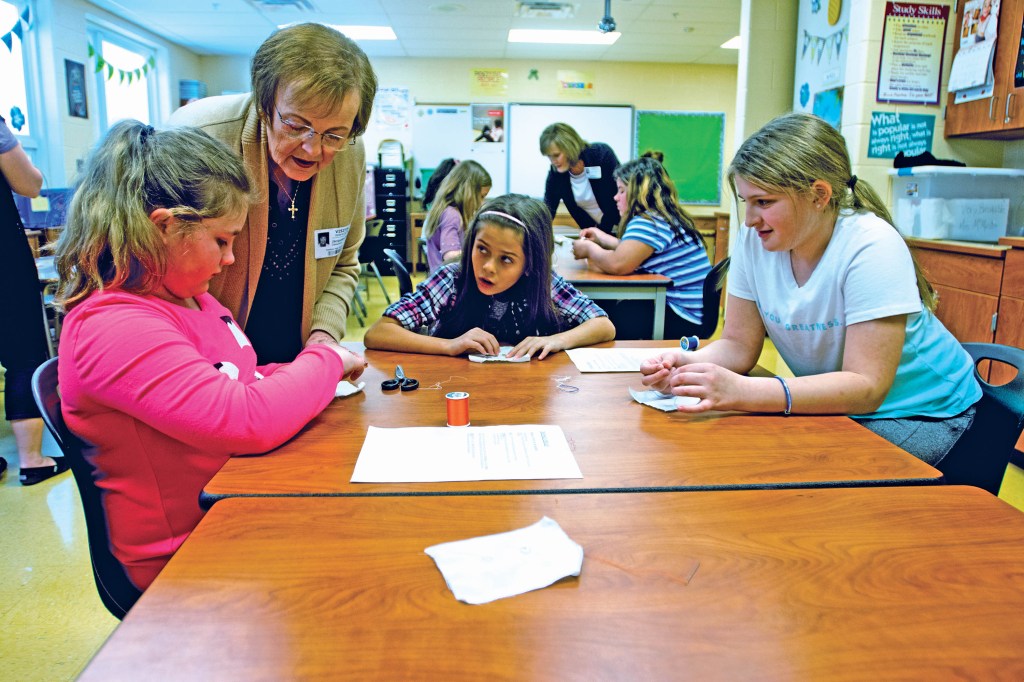 For the past several weeks, students from Ironton Elementary School have been taking part in an after school program to learn skills like sewing, cooking and basic car maintenance.

Last Thursday, members of IES’s Ladies Academy were at Ironton High School learning how to sew buttons and how to make a simple meal. On Monday, they were back at the school to learn how to check tire pressure, change wiper blades and how to check fluids in the car engine.

IES Assistant Principal David Ashworth came up with the idea two years ago of having the Gentleman’s Academy to teach male elementary students the skills of being a gentleman and being presentable in public, since he felt that those skills have been become underused because of the weakening role of men in society and many households have absent fathers or father figures. The students spent several weeks learning everything from the proper way to shake hands to tying a tie to how to conduct themselves when eating a meal in a public setting. Men from the community and teachers came in to help.

The Gentleman’s Academy was so popular that Ashworth set up the Ladies Academy.

“We modeled it after the Gentleman’s Academy, but of course, tailored it for our ladies,” Shamblin said, adding there weren’t too many differences in what is taught in the academies. “They both learned sewing, they both got to work with tools. But, today, we learned how to sit after a gentleman pulls out a chair for you and things like that. Not too many differences.”

Shamblin said she hopes that what the students take away from Ladies Academy is confidence.

“I wanted to know how to cook and to sew,” she said. “My favorite part is learning to sew buttons.”

Lexi Cochran, a fourth grader at IES, said she attends the course because she wanted “to learn how to be a lady and to cook and work with money.”

She said her favorite part so far was cooking.

She said it was important for the students to learn to cook.

“That way, they won’t just eat fast food and they can learn to take care of themselves, because you have to eat everyday,” she said. “This is a life skill that they will use for the rest of their life. And eating out is expensive.”

On Thursday, the Ladies Academy will have come to an end with a luncheon when they eat with men from the community including police officers, the sheriff, fire fighters, businessmen and Bikers for Christ members. They will use all their newfound social skills learn to be confident in social settings and when meeting new people.