Boots on the ground: Officials pick up litter as part of Project First Impression 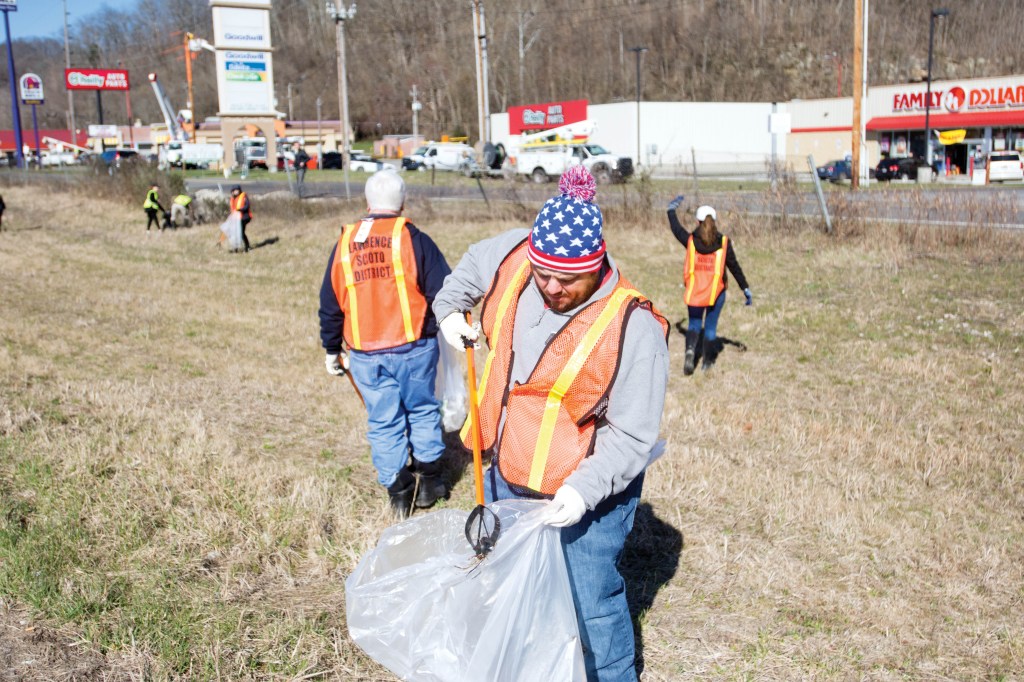 The Tribune/Mark Shaffer Lawrence County Commissioner Colton Copley picks up litter on Tuesday morning from the side of U.S. 52 in South Point as part of Project First Impression’s countywide effort to beautify the landscape.

SOUTH POINT — If you passed through South Point on Tuesday morning and saw people in orange vests picking up trash, you may have passed some of your elected officials getting boots on the ground in their fight against litter.

As part of Project First Impression, the Lawrence County commissioners, a Fayette Township trustee and people from several county offices gathered in the parking lot of Tractor Supply Company to get geared up to pick up trash from the side of U.S. 52.

Lawrence County Commissioner Deanna Holliday said that Project First Impression is a collaborative effort to bring all the resources available in the county to this project and really make a deliberate effort to clean up the landscape in southern Ohio.

“I believe we have the most beautiful landscape in the whole state of Ohio, but it is covered by litter right now,” she said. “So, we have to do our part to clean it up and to deliver the very best first impression that we can.”

She said there was a reason that Tuesday’s effort consisted of many elected officials.

“We felt like our actions need to stand for themselves, because actions speak louder than words,” Holliday said. “We want to be sure our actions are speaking loud enough to be heard.”

Lawrence-Scioto Solid Waste Management District Director Dan Palmer was there as well as his enforcement officer.

Palmer handed out the high-visibility orange vests, garbage bags, gloves and long tongs to pick up trash to those who gathered in the 34-degree weather.

He said he was happy with all the help on Tuesday. There were 20 officials and county personnel and approximately 30 people on two different community service crews.

“I’m ecstatic that we have this many people,” Palmer said. “The word is getting out, we are fed up with trash and litter.”

Palmer said Lawrence County Municipal Court Judge Donald Capper and Ironton Municipal Court Judge Waldo had sent crews of people serving a community service sentence out last week. They were picking up trash starting at County Road 1A and heading towards the bridge into Ashland, Kentucky.

“We got 509 bags of litter,” he said. On Tuesday, one of the solid waste districts was starting at the bridge and cleaning that area.

“The Ohio Department of Transportation is working with us and is going to restrict traffic down to one lane, for safety, so we can get the bridge clean,” Palmer said. He added that ODOT would be sending a vacuum truck to clean up all the cigarette butts that people toss onto the roadway.

Palmer was upset that a community service crew had cleaned up the median along restaurant row in South Point two weeks ago and on Tuesday, it was full of litter again.