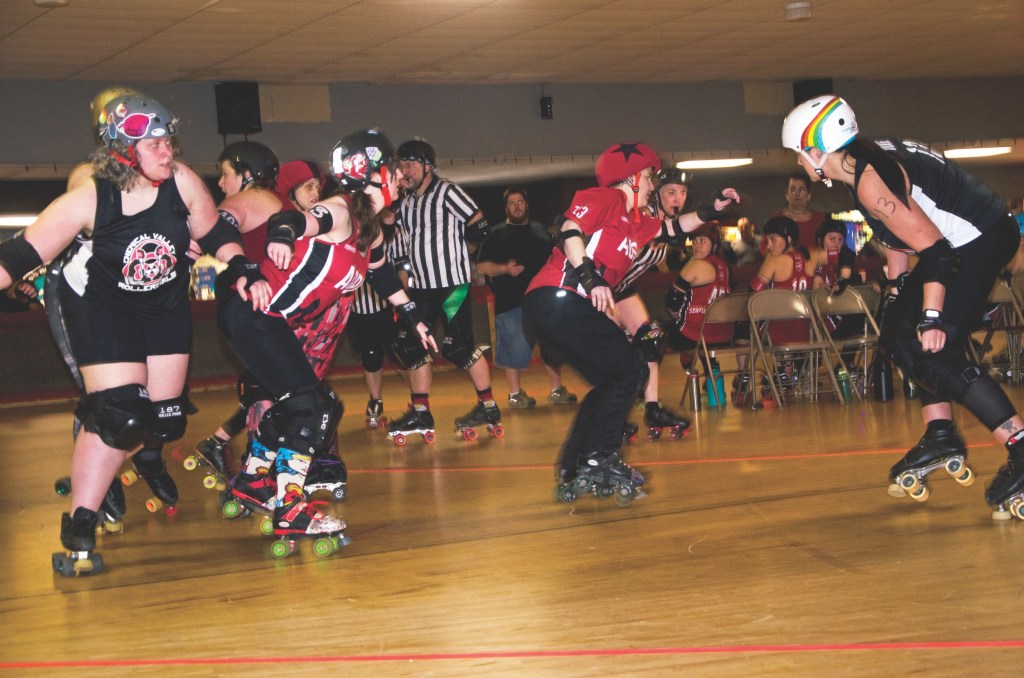 The Tribune/Heath Harrison Members of the Chemical Valley Roller Girls, in the black jerseys, face off against the Appalachian Hell Betties , in the red jerseys, at Skateland in Altizer, West Virginia on Saturday.

HUNTINGTON — A roller derby team representing the Tri-State area has begun its season.

The Chemical Valley Roller Girls faced off against the Appalachian Hell Betties, of the Akron area, at Skateland in Altizer on March 23.

The team now features members of the Poison Apples, the Huntington-based team, which covered the Ashland and Ironton areas and had played in the area for the last few years.

“They merged with Chemical Valley Roller Girls this past winter,” Karen Shelton, the team’s coach, who goes by the name “Shorty Shorts,” said.

The team, featuring players with names such as Brawl McCartney, Veruc Assault, Bad Wolf and Valkyrie, is based in Charleston, now also covers the Huntington group’s area.

Saturday’s match, which the Chemical Valley Roller Girls won, 126-98, drew a packed house, with a good-natured crowd of all ages, cheering on all the players, regardless of team.

Roller Derby, of the kind the team takes part in, is played on a flat track in the matches.

Two opposing teams skate in the same direction around the rink. Each team has a jammer, whose job is to lap the other team, resulting in points scored.

The team has several games scheduled for Skateland for the rest of the season, member Katie Norman said.

On April 13, they will take on the Rail City Rollers, followed by the Ohio Valley Roller Girls, of Saint Clairsville, on June 22, the Hell’s Orchard Roller Derby, of Marietta, on July 20 and the Silver Bridge Bruisers, of Gallia County, on Sept. 14.