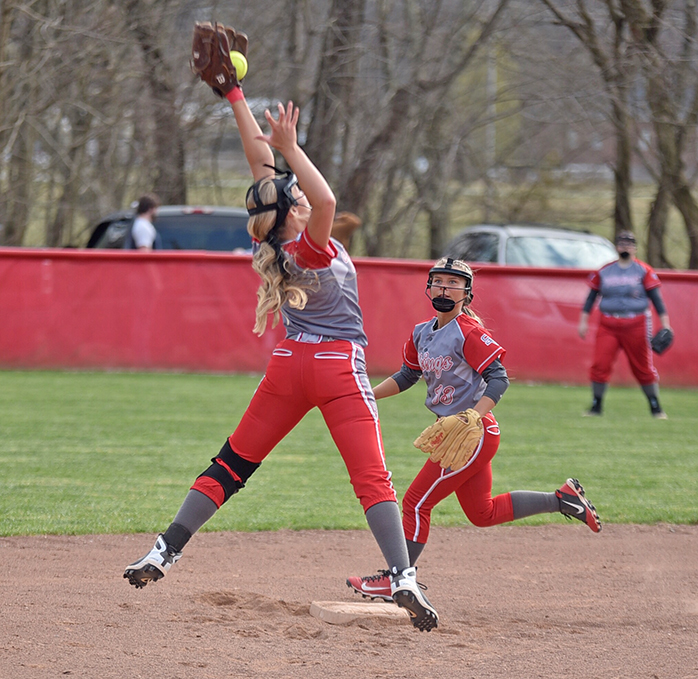 AID — It’s not a perfect world, but it was a perfect game.
Kara Saunders threw four perfect innings and Sarah Kingery had another perfect inning as the duo combined on a perfect game and the Symmes Valley Lady Vikings blanked the Sciotoville East Lady Tartans 13-0 in a five-inning Southern Ohio Conference game on Friday.
Saunders struck out four and Kingery fanned the side as they combined for seven strikeouts.
“The pitchers did really well. We had some good defensive plays behind them,” said Lady Vikings’ coach Jeff “Odie” Estep. “It was a good team effort.”
The offense had 13 hits led by Morgan Jenkins who went 3-4 with a triple. Kingery was 2-4 with a home run and Saunders 2-2 with a double.
The Lady Vikings exploded for eight runs in the first inning.
With one out, Jenkins tripled and Kingery singled her home. After a wild pitch, Saunders doubled home a run. Emily Estep walked, Kelsie Gothard was hit by a pitcher, and after a force out at home, Payton Hunter had a two-run single.
Rachael Hayes singled to load the bases and Jenkins had a two-run hit. Kingery walked and a wild pitch and passed ball scored the final run.
The Lady Vikings created the run rule with five runs in the third.
Hayes singled and Kingery belted a two-run homer. Saunders walked, moved up on a wild pitch and Ericca Ross was safe on an error as the run scored.
Estep and Sharp singled for a run and with two outs Jenkins singled in the final run.
Sciotoville 000 00 = 0 0 7
Sym. Valley 805 0x = 13 13 0
Smith and Lyons. Kara Saunders, Sarah Kingery (5) and Ericca Ross. W-Saunders (IP-4.0, K-4). Kingery (IP-1.0, K-3). Hitting-SV: Morgan Jenkins 3-4 3B, Sarah Kingery 2-3 HR, Kara Saunders 2-2 2B, Ericca Ross 1-3, Emily Estep 1-2, Emily Sharp 1-2, Kylee Jenkins 1-2, Payton Hunter 1-2, Rachael Hayes 1-2.