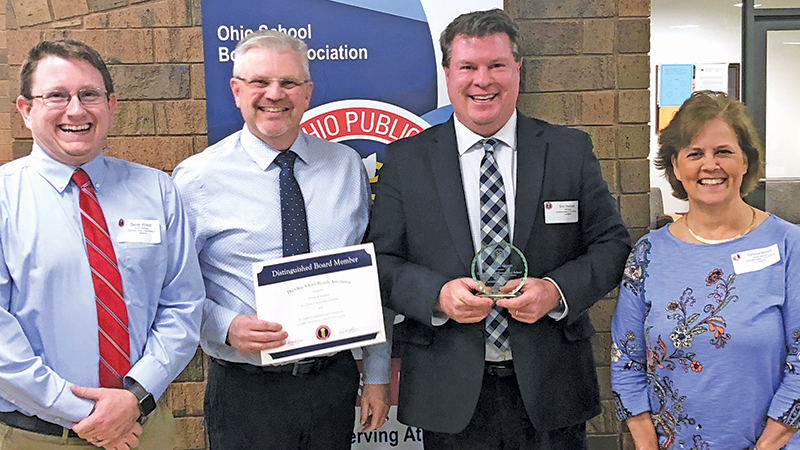 Symmes Valley Elementary was honored last week by the Ohio School Boards Assoaition with the Education Momentum Award. Pictured, from left, Symmes Valley School Board members Derrick Wilson, Tommy Shepherd, principal Eric Holmes and board member Tammie Myers. Shepherd was also recognized for 10 years of service on the board.

Eric Holmes, the principal of the school, said the designation was for the 2017-18 school year.

“It shows how much growth we’ve had on state tests from one year to the next,” he said.

He said credit goes to the staff and students.

“They work hard every year, trying to determine what standards are, and the students work hard,” he said. “As a result, they do well from one year to the next.”

Holmes said the school employs a system of Teacher-Based Teams (TBTs) which meet to work on school progress.

“It’s a slow process, but they implement changes from one year to the next and we use data to see if there’s a positive effect,” he said. “And with this good input, we get this type of result.”

The Momentum Award recognizes all public districts and schools with at least two Value-Added subgroups of students, which include gifted, lowest 20 percent in achievement and students with disabilities.