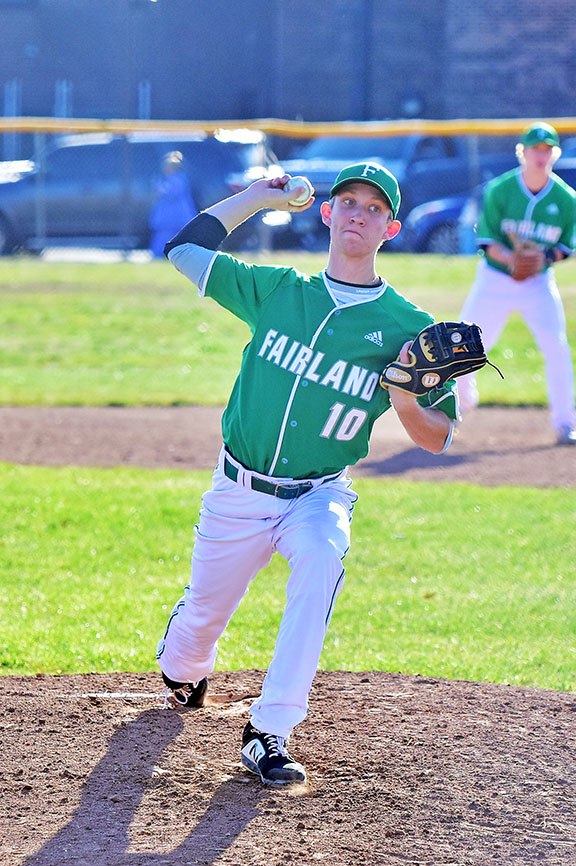 PROCTORVILLE — It’s early, but the Fairland Dragons are sitting atop the Ohio Valley Conference standings.
The Dragons held on to beat the Rock Hill Redmen 8-6 on Wednesday.
Fairland (3-2, 2-0) got solid pitching from Reilly Sowards who went 6.2 innings allowing seven hits, strikeout out five and now walks.
Alex Rogers got the final out to record the save as Rock Hill left the bases loaded.
“We got people on, we just couldn’t get that one big hit that drove in people. Landon threw the ball well. It just wasn’t our day,” said Rock Hill coach Barry Litteral.
Rock Hill (4-2, 1-1) went up 1-0 in the top of the third when Jake Blagg singled, stole second and scored on a hit by Kaleb Kidd.
Fairland and Gallipolis are both 2-0 in the OVC.
Fairland came back with two runs in the bottom of the inning.
Rogers singled, took second on an error, and after an out Brennan West singled. West stole second and scored on a hit by Gavin Hunt.
The Redmen went up 3-2 in the top of the fifth when Blagg was safe on an error, stole second and third, and scored when Logan Hankins infield popup fell in for a hit. Kidd then doubled home Hankins.
The Dragons regained the lead with three runs in their half of the inning.
With two outs, West singled, Hunt was safe on an error and Dacoda Chapman singled. Sowards singled for a run and Chapman scored on a throwing error.
Fairland came back with three more runs in the sixth to lead 8-3.
With two outs, Defoe and West singled and Hunt singled to drive in one run and an outfield error scored West and sent Hunt to second. Hunt stole third and scored on a throwing error.
Rock Hill mounted a rally in the seventh that fell short.
Blagg singled, stole second and took third on Hankins’ infield hit. Kidd singled to score Blagg but Hankins was thrown out at home.
Kidd went to second on the throw and scored on a hit by Kadin France. Landon Smith got a base hit and pinch-runner Nick VanKuren scored.
West was 2-3 with a double and Hunt 2-4 with five RBI for Fairland.
Kidd was 3-4, Hankins 2-2 and Blagg 2-4 to lead the Redmen.
Rock Hill 001 020 3 = 6 9 4
Fairland 002 033 x = 8 9 5
Landon Smith and Kaleb Kidd. Reily Sowards, Alex Rogers (7) and Bryan Defoe. W-Sowards (IP-6.2, H-7, K-5, HBP-2). Save-Rogers. L-Smith (ER-2, K-9, BB-2, HBP-1). Hitting-RH: Jake Blagg 2-4, Logan Hankins 2-2, Kaleb Kidd 3-4, Kadin France 1-4, Seth Nichols 2-4; FHS: Gavin Hunt 2-4 5-rbi, Dacoda Chapman 1-4, Reilly Sowards 1-3, Alex Rogers 1-3, Bryan Defoe 1-3, Brennan West 2-3 2B.