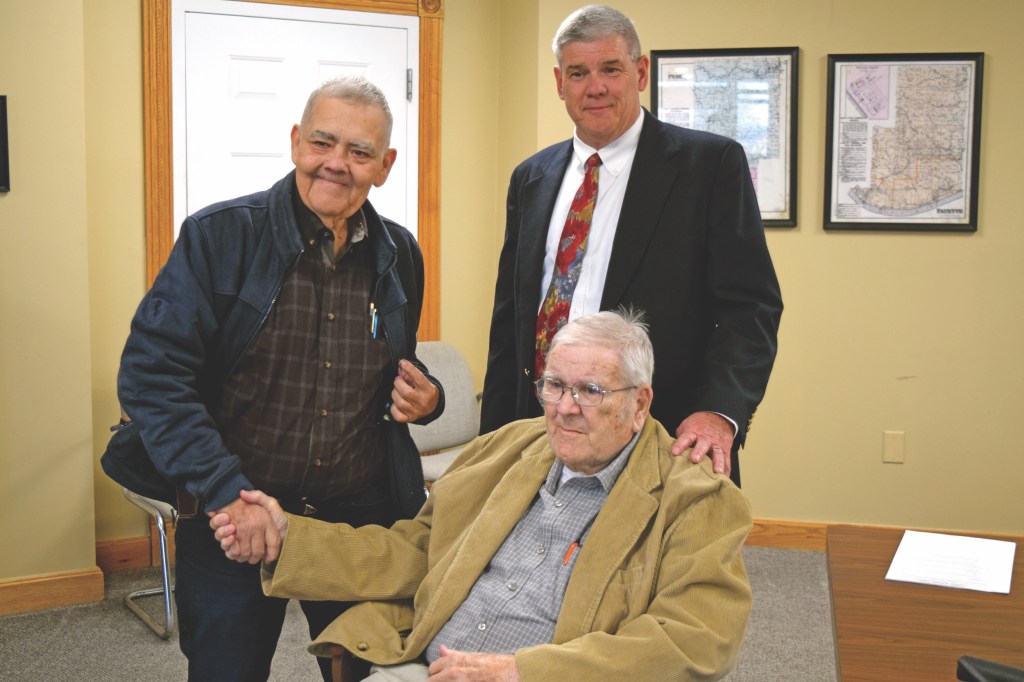 The Tribune/Heath Harrison The South Point Village Council honored Bill Van Bibber, center, who retired in February after 14 years as village chaplain, at village hall on Tuesday. Pictured with Van Bibber are Jerry Boggs, left, who will take over the duties as chaplain, and Mayor Jeff Gaskin.

SOUTH POINT — Bill Van Bibber served for 14 years as chaplain for the village of South Point, with his tenure covering the terms of four mayors.
He retired from the position in February and, on Tuesday night, the village council and Mayor Jeff Gaskin paid him tribute.
“We really appreciate and love you,” Gaskin told Van Bibber as he presented him with a plaque for his service. “And we want to ask you to pray for us one more time.”
Van Bibber noted that he started under Gaskin’s father, Bill, and had worked on the job until another Gaskin was mayor.
“I figure it’s a good place to quit,” he joked.
Van Bibber, who is retired from a tax business has been affiliated with a few churches in the region and worked with Appalachian Children’s Ministries.
The council hosted a reception for himbefore the monthly meeting of council, drawing friends and family and village residents.
Van Bibber said his time as chaplain was “a blessing” and said he hoped to offer guidance to the mayor and council.
“I pray for you all the time and I know this a bigger job than anyone in this village realizes,” he said. “I thank you for the privilege and honor of praying for you.”
Van Bibber will followed in the job as chaplain by Jerry Boggs.