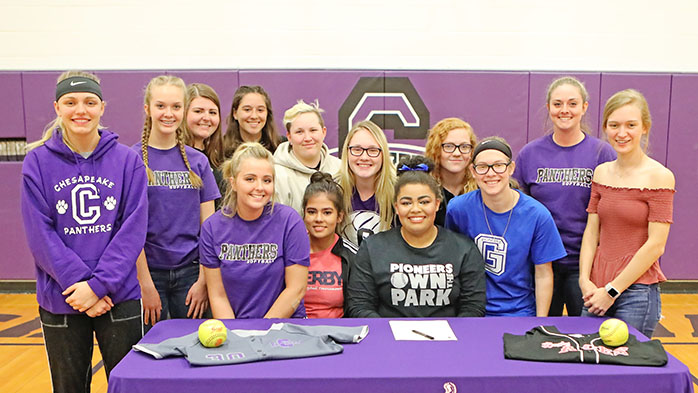 CHESAPEAKE — Coaches love to see how well players go from first base to third base. Jordan Storms does it well, but not in the traditional way.
Instead of running, the Chesapeake Lady Panthers softball standout can go from first to third as a fielder and that is what attracted the Glenville State College Lady Pioneers.
That versatility sold the Glenville coaches and then Storms was sold on the Lady Pioneers.
“I like third better than first, but I’ll do whatever I have to do for my team,” said Storms who admitted her first choice is third.
“Third base is a lot more exciting, I just like the speed of it. It’s called the hot corner for a reason and I love being over there.”
Storms signed a letter-of-intent to play softball for Glenville State and test her flexibility.
“Georgetown was interested in me this past summer, but it just didn’t work out and I decided going to Glenville was a better fit,” said Storms.
“Honestly, the fact that it was a D2 school and I know people who actually played for Glenville, so I wouldn’t go in not knowing anybody.”
Chesapeake coach Aaron Rice had plenty of praise for Storms.
“Jordan has been a four-year starter for us. She’s always been a good worker. This year, in particular, she’s accepted that leadership role of being a senior,” said Rice.
“She has gotten off to a really good start. She hits fourth in our lineup and she has done a great job of getting on base and doing what she’s supposed to do hitting in the fourth spot.”
Storms began playing softball when she was 4-years old, but she said the first time she was on a softball field she was only three weeks old.
“It’s in my blood,” said Storms.
Early in her high school career, Storms played volleyball and basketball as well as softball and she was a cheerleader.
“If I’m being honest, I didn’t love softball for the longest time. As I got older, I realized I was actually pretty decent at it. I was never going to be tall, so basketball was out of the question. Volleyball was just for fun with my friends.”
Storms said there is an opportunity for her to start next fall, but it will take work and getting faster.
“Anyone can start at any time, so as long as I do what I’m told and do the best that I can to get in better shape, then there is a possibility I can start as a freshman,” she said.
“I just want to do my best in college. Get good grades, get my degree and play softball and have fun,” said Storms.
Storms played summer travel ball with the Diamond Thunder and coach Mike Henson. She said Henson was an integral part in her development.
“Mike Henson first coach who completely believed in me and pushed me past my limits. He is the reason I am the player I am today,” said Storms.
“I want to thank coach Rice, obviously, and Mike Henson and Jimmy King for giving me the opportunity last year to play softball (for the West Virginia Aces) I and make my best friends. We won the national championship which was great.”
Rice said he has no concerns about Storms adjusting to the next level.
“It depends on where they’re going to play her, but she’s capable of playing multiple positions,” Rice said.
“She has a very high softball IQ. She’s very intelligent about the game and knows how to play different places and what she’s supposed to do there. And, she can always swing the bat.”
Storms plans to major in exercise science.
“As of right now, my plan is to be an equine physical therapist, but I figure I’ll coach at some point,” said Storms.