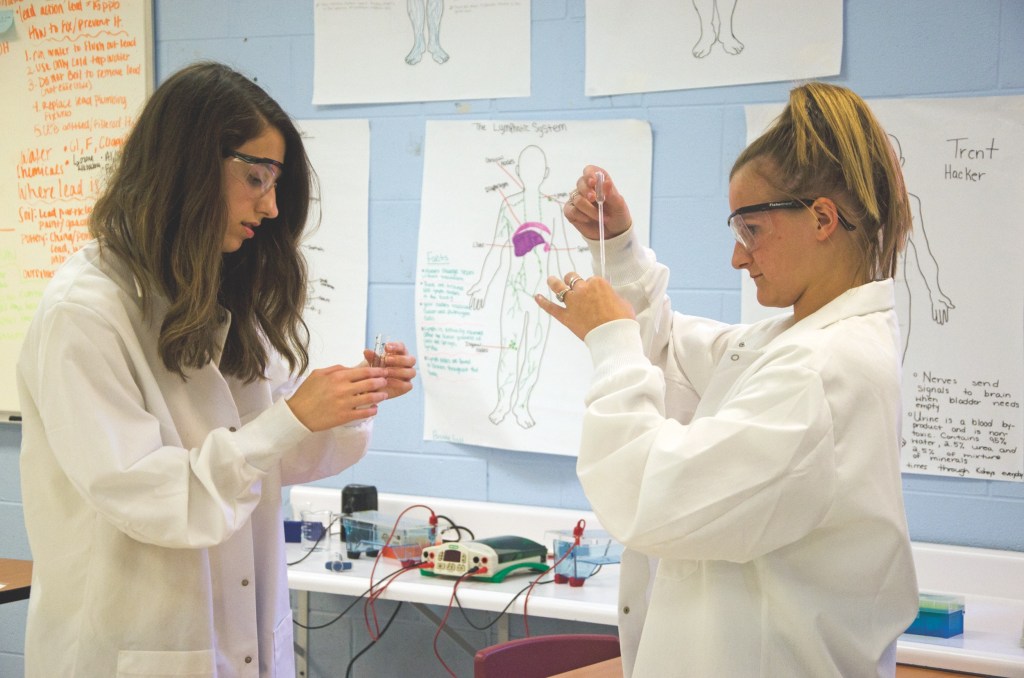 The Tribune/Heath Harrison Ironton High School juniors, from left, Bela Delawder and Lexie Payne, will be part of a team of Project Lead the Way biomedical students testing water around the city of Ironton. Along with senior Kylie Hopper and instructor Sarah Humphreys, they will be checking for levels of lead and copper in homes with older pipes.

A team of biomedical students from Ironton High School will be spending their summer, checking the quality of water used by homes in Ironton.
The group, consisting of juniors Bela Delawder and Lexie Payne, senior Kylie Hopper and instructor Sarah Humphreys, are part of the Project Lead the Way STEM program through Collins Career Technical Center.
“We were studying pollution and how it affects everyday life, “ Payne said. “And we learned about a family who had problems from a polluted water source.”
They then tested well water, tap water from the school’s drinking fountain, as well as other sources.
“We kept getting different results,” Delawder said, noting that they were checking for coliform, a bacteria whose presence in drinking water can indicate the presence of disease-causing organisms.
From there, they called the filtration plant for the city of Ironton and got in touch with Ryan Watts, the superintendent of the facility.
“He let us tour the facility and we asked him why we kept getting different results,” Payne said.
The two said they looked at different chemicals that are put in the water and they learned, rather than an issue at the plant, most problems in water quality come from pipes within homes, especially those of older homes built prior to the mid 1950s, which may have copper or lead issues.
“He told us every June 1–Sept. 30, they do water testing around Ironton,” Delawder said. “And he asked if we wanted to help.”
The group will be doing this as part of their final project for the PLTW program, Humphreys said.
“We’ll go to houses that might have issues,” Payne said. “And Ironton has a lot of older houses.”
In addition, the students put together a pamphlet, explaining issues with water quality, which they plan to distribute, Humphreys said.
“We’ll not only be collecting samples, but we’ll be letting them know more about prevention with lead and copper,” Delawder said.
The group is waiting on kits to begin the testing, which they will also use on their own residence, as two of the three students live in older homes.
Payne said the studies so far and what they have learned about water quality have surprised them.
“It’s been a real eye opener,” she said.
Humphreys said that anyone in Ironton who wants to have their water checked, particularly those in older homes, can email the group at irontonbiomed@gmail.com with their address.