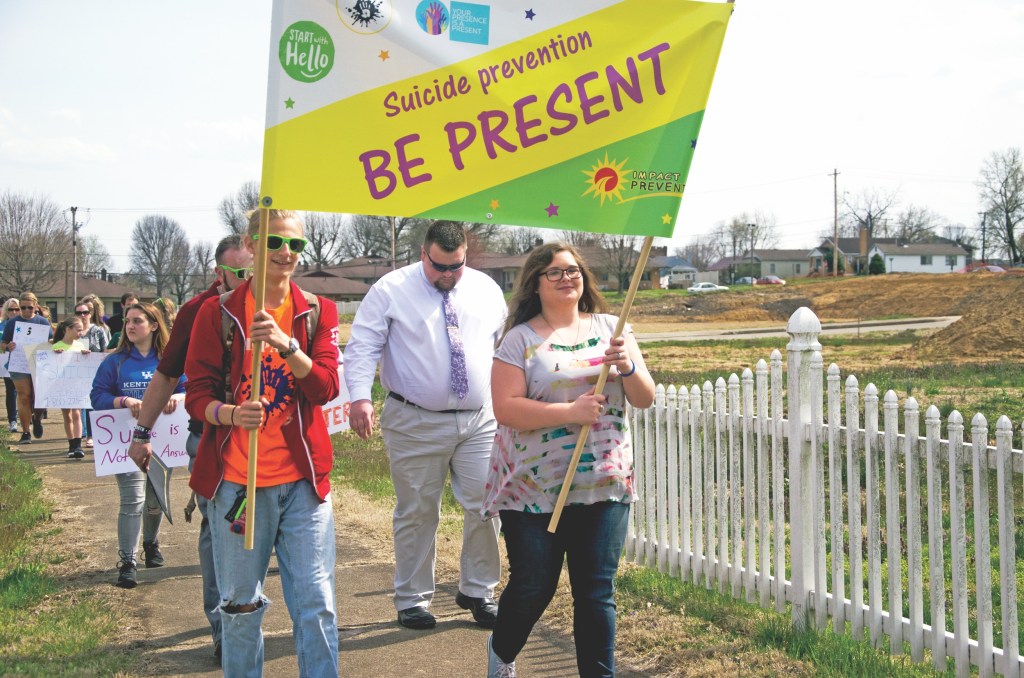 The Tribune/Heath Harrison A suicide prevention and awareness walk, organized by Impact Prevention, took place on Thursday, beginning at the group’s headquarters on South Ninth Street and ending at the Lawrence County Courthouse.

About 80 people could be seen walking up South Ninth Street on Thursday afternoon, carrying signs with messages such as “You matter,” “Be present” and “Start with ‘Hello.’”
The group was headed to the Lawrence County Courthouse, where it planned to hold a rally addressing the issue of suicide prevention.
The events were organized by Impact Prevention, a nonprofit organization that works with youth in the region to inspire them to become community change agents, while focusing on empowerment through evidence-based prevention strategies.
The group has said their goal is to create a sense of community to try to combat negative situations that may lead to suicide.
Thursday’s events were dedicated in memory of Lawrence County Commission President Bill Pratt, who died in December.
Pratt’s fellow commissioner, successor as commission president and friend, Freddie Hayes Jr., was one of the participants in the walk.
At the courthouse, Hayes issued a proclamation, recognizing April as Social Inclusion and Community Connectedness Month in Lawrence County.
“Social inclusion and community connectedness raises awareness of social isolation and educates students, teachers, school administrators, counselors, school resource officers, school staff, parents and the public on effective ways to reduce suicides,” Hayes read.
The proclamation stated that the “Start with Hello” and “Be Present” programs would teach children and teens to recognize the signs of social isolation and provide resources for support and help.
One of the groups taking part in the event was Shawnee Family Health Center.
“This is important,” Kalyada Cloud, of the group, said. “Everyone needs to know.”
Eddie Neel, youth programs coordinator with Impact, said the group has several events planned for the coming month for families and the community.
On April 15, there will be a free family event at Spare Time in Ironton, running from 5-8 p.m.
Then, on Saturday, April 27, a free festival will take place at the Ro-Na Theater downtown, featuring music, entertainment and food. That event will run from noon-4 p.m.
The group will also be offering a Teen Leadership Camp from May 10-12 for fifth through seventh graders. Organized by Impact, the camp will also be staffed by volunteers from local high schools. Sign-ups for that camp will be done through individual schools.
Neel also reminded that the group is a 501(c)(3) non profit and “could always use funds.”
“People can help us foster these partnerships,” he said of potential donors.