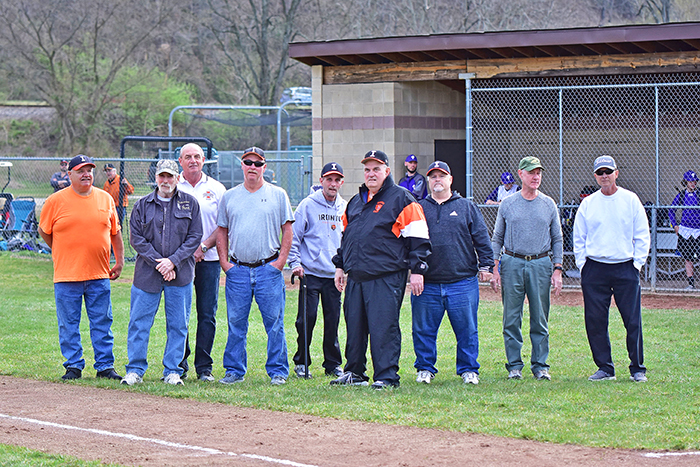 This Mike Burcham Wood Bat Classic lived up to its name.
From former players to four excellent games, the annual Ironton High School classic provided plenty of entertainment and excitement for baseball fans.
The day began with the introduction of former players that included many members of the 1972 Class state championship team.
The ace pitcher of that team — Jerry Murnahan — threw out the first pitch to get the festivities underway.
“Overall, it was a great Wood Bat Classic,” said Ironton head baseball coach Travis Wylie.
“We had a dozen or so of the 1972 state champion players there and seeing Jerry Murnahan throwing out the first pitch of the day was a great way to start the day.”
The day continued to go well for Ironton.
The Fighting Tigers beat Lucasville Valley 11-1 in five innings and then finished the day with an 11-9 win over Lexington Bryan Station which happened to be coached by Wylie’s former classmate and teammate at Ironton in Justin Royal.
The two played on an Ironton team that reached the Final Four as sophomores and then the district tournament as seniors. Wylie went on to play at NCAA Division III power Marietta College and Royal made his mark pitching for the University of Pikeville.
“Getting to be back on the field with Justin Royal was special, too,” said Wylie. “He was a great teammate and is still a great friend.”
Wylie said the classic was made possible through the efforts of many people including sponsors End Zone Pizzaria, Davis Denistry, Morris’ Barber Shop and Glockner Enterprises.
“I would like to thank all who came out to support the tournament and the sponsors who were able to donate. It made for a great event and a great day,” said Wylie.
Two other games were played between Ironton’s games. Spring Valley beat Lucasville Valley 6-5 in the second game and Huntington High edged Bryan Station 3-2 in the third game.
The classic is named in honor of former Ironton head coach Mike Burcham who is a member of the Ohio High School Baseball Coaches’ Hall of Fame and guided Ironton to its only state championship in baseball.
Burcham was the head coach for 18 seasons and posted a 319-123 record. Also, he was an assistant football coach for more than 40 years and Ironton’s athletic director for 30 years.
He is a member of the Ohio High School Athletic Directors’ Hall of Fame and the University of Rio Grande Athletic Hall of Fame where he was an outstanding catcher and hitter for the baseball team.
“I coached a lot of great players. It’s hard to rate one guy over another,” said Burcham. “But the Murnahan brothers were both outstanding players.
“Phil is the best pitcher I’ve ever coached. He pitched a game against (future Cincinnati Reds’ Hall of Famer) Don Gullett when they were seniors and beat him 1-0. But I’d have to say Jerry is the best all-around player. He could play any position on the field and play it well including catcher.”