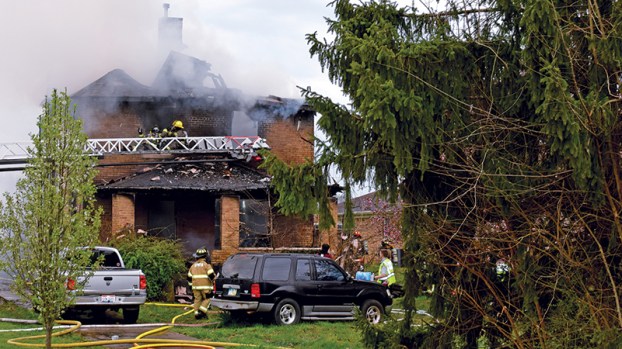 Fire crews were called to the scene of a house fire on Township Road 1434 in Burlington early on Monday morning. (The Tribune | Sarah Simmons)

BURLINGTON — One person died in a house fire in Burlington on Monday morning.

Fire crews were called to the scene of a house fire on Township Road 1434 in Burlington early on Monday morning.

Lawrence County Sheriff Jeff Lawless confirmed there was a fatality and that a second person was taken to the hospital but couldn’t release further details yet.

“The coroner is on the scene as is a deputy,” he said, adding that the State Fire Marshal’s office had been called in to investigate the cause of the fire. “Their findings will determine if we investigate this case” since someone died in the fire.

Roads were blocked off to traffic.

Reports of injuries were not available as of press time.

See Wednesday’s edition of The Tribune for a full report.

About 80 people could be seen walking up South Ninth Street on Thursday afternoon, carrying signs with messages such as... read more