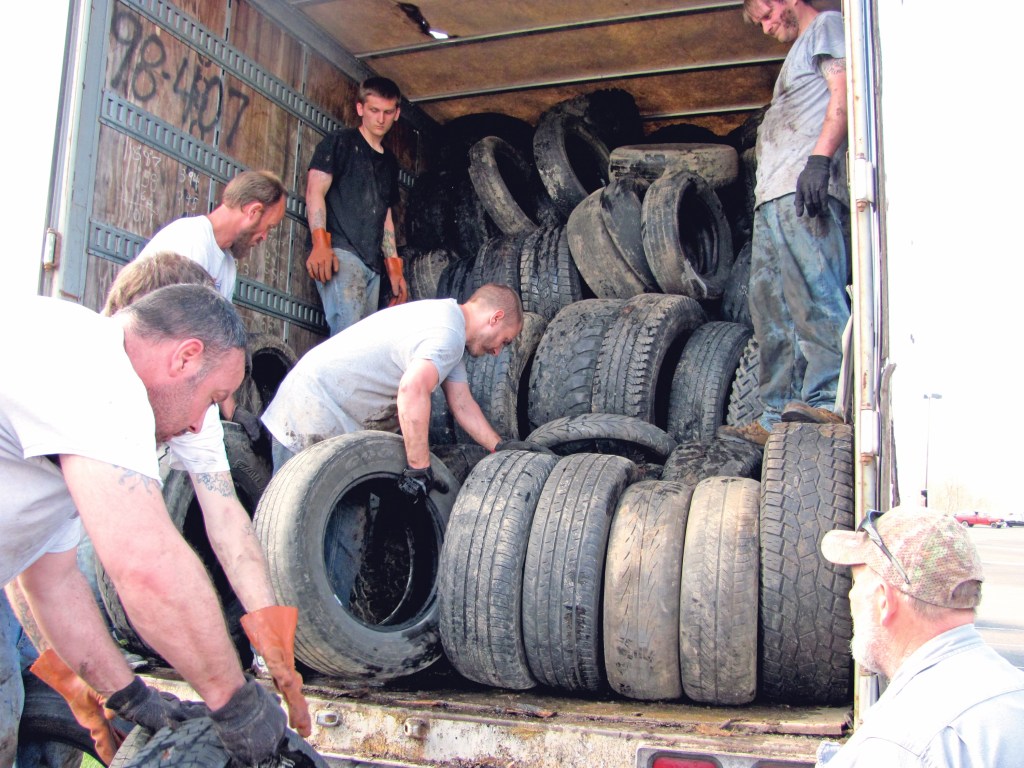 submitted On Saturday, crews from Lawrence-Scioto Solid Waste Management District took in 1,757 tires during a tire amnesty event. Lawrence County residents could drop off up to 10 tires and the solid waste district then has them recycled.

As Dan Palmer, the executive director of the Lawrence-Scioto Solid Waste Management District, predicted, they were very busy during its annual tire amnesty day on Saturday.

The event at the Ironton Hills Plaza gives Lawrence County residents a chance to dispose of up to 10 tires. The solid waste district then makes sure the tires are properly recycled.

Palmer said they started at 9:30 a.m. and at no time, did we get a break,” Palmer said. “There was a consistent line of vehicles of no less than 25 vehicles at any time.

He added that there were residents from all over the county, including Chesapeake, South Point, Ironton, Willow Wood, Andis, Waterloo, Kitts Hill and Coal Grove.

“It was a fantastic turnout,” Palmer said.

The solid waste district has more waste events coming up.

On Saturday morning, there will be a drug take back day at the Ironton Hills Plaza with the Lawrence County Sheriff’s Office.

They will take prescription and over-the-counter medications and sharps like syringes.

Palmer said the pills would be taken by the sheriff’s office to OSCO Industries in Portsmouth for incineration, which is approved by the EPA. Our Lady of Bellefonte Urgent Care at Ironton Hills took the sharps for disposal.

An electronic waste and document shred day will be on May 11.

“People will have the opportunity to properly dispose of their electronics, such as cell phones, computers, key boards, copy machines, etc.,” Palmer said. “We’ll also be shredding any sensitive documents that people may have and want to get rid of.”