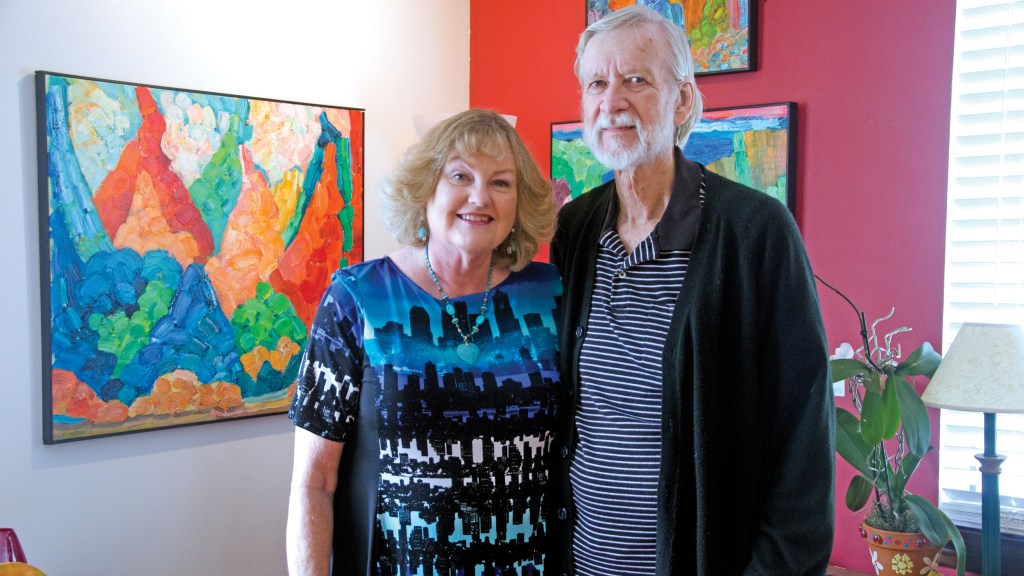 The Tribune/Heath Harrison Robert and Robin Hutton are owners of the Wayfarer Gallery, which opened in December 2018 at 52 Private Drive, 250, off County Road 144 in South Point.

SOUTH POINT — A new art gallery in South Point is featuring the works of a veteran artist who has taught a generation of students and is highlighting the works of accomplished artists throughout the Tri-State.

Robert Hutton, who retired from Marshall University in 1999, opened the Hutton Wayfarer Gallery in December 2018 with his wife, Robin.

“I’d been doing artwork for 60 years,” Robert, who recently turned 80, said. “I started in high school and accumulated quite a bit of work.”

He said it was Robin’s idea to take the two-story home on their 43-acre farm that was being vacated by their daughter and turn it into a gallery, which could showcase his work, as well as host guest shows for faculty members, former students and accomplished artists the couple has met over the years.

“Although I’ve had my work exhibited many places, I thought it would be an excellent way to encounter other people and we sell works for a modest commission. We know what it’s like to be artists, struggling to survive.”

Robin says they worked as a team in getting the home ready, scraping the walls and repainting it.

A graduate with a major in theology, Bible and religion, she has worked as a youth minister with teens for 44 years. She handles promotion, and press for the venue, designing flyers and coordinates the booking of guest artists for monthly shows.

“We brainstorm together for artists we’ve known in our lives,” she said.

Robert said he hoped the gallery could offer a unique atmosphere.

“We hope to offer a friendly, homey environment, instead of a formal gallery or museum,” he said.

They had a small soft opening on Dec. 29, which was followed by their first event, a Marshall art department reunion of former faculty and students, something they hope to repeat often.

Robert, whose classes at Marshall included drawing, sculpture and watercolor, has pieces in each of the home’s rooms, with acrylic and oil paintings, pen and ink drawings and others on display.

The gallery takes its name from “The Wayfarer,” one of a series of watercolors he made in the 1980s, which hangs in the entrance room.

Robert describes the caricature figure in the piece as “plodding forward, on a journey, with a heart aflame, seeking truth, justice and peace.”

Upstairs is the Sunrise Room, featuring Robert’s watercolors, as well as the Sunset Room which contains a display the couple particularly likes.

Robert calls it the “One in a Thousand” series, made up of quick, spontaneous pen and ink drawings.

Each piece is numbered and they invite guests to give each a title, based on “what they think is happening” in the pieces, Robin said.

Hutton has remained prolific and productive following his retirement from Marhsall and the opening of the gallery came as Robert he a three-and-a-half-year project in his studio, also located on the farm.

He was commissioned to complete a large mural, set to be unveiled when Marshall University reopens Jenkins Hall later this year.

The project details the history of the MU Lab School, which was in the building through 1970 and is comprised of 440 tiles, which fit together like a puzzle.

Robert said he wanted to incorporate the grout lines as part of the design, rather than use a traditional grid.

The lab school holds a special meaning for the Huttons, as it is where they met. Robin remembers the first time she saw him in the building.

“He had just finished teaching his class,” she said.

In addition to the works in the gallery, visitors to Wayfarer events have been invited on tours of Robert’s studio, where they got a chance to preview the mural before it is taken to be installed.

The monthly receptions and art talks at the gallery are open to the public and details on their schedule can be found on the Wayfarer gallery Facebook page.

Robin, who describes herself as “a people person,” said the events give the couple “great joy.”

“It gathers people together, renews friendships and creates great joy,” she said.

The gallery is open to visitors by appointment, which can be set up by contacting the couple through the Facebook page or emailing Robin at rhutton@zoominternet.net.

The Hutton Wayfarer Gallery is at 52 Private Dr. 250, off County Road 144, about 5 minutes from the Solida Road roundabout. 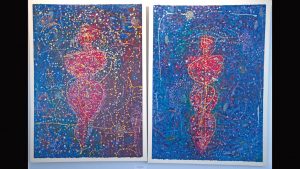 The Tribune/Heath Harrison
The works of Charleston, West Virginia artist Diane White are on display at the Wayfarer Gallery in South Point until April 21. She is the first of the venue’s monthly guest artists.

SOUTH POINT — The work of Charleston, West Virginia, artist Diane White has been on display at the Hutton Wayfarer Gallery for several weeks, but you can still catch the exhibit until April 21.

White, a Marshall University graduate has several pieces up as part of her mini retrospective, “The Big Picture is Made of Little Pieces.”

“I was always introverted, studious and easily overwhelmed,” White says in her biographical statement accompanying the show. “My love of art and reading fit well, since they were mostly solitary endeavors.”

The centerpiece of the exhibit is a triadic series of paintings, employing blue, yellow and red in a series of layers and depicting the female form in abstract.

White has taught as an adjunct professor at Marshall, as well as at Winfield High School, Montessori School and Kanawha County schools in West Virginia before retiring in 2011.

She has exhibited in West Virginia, New Orleans, California, Boston and Cleveland and her work has sold at The Art Store in Charleston, Wayfarer co-owner Robin Hutton said.

Following White’s exhibit, the gallery will host its next guest show, by Willow Wood artist Katherine Cox, who recently retired as the director of education at the Huntington Museum of Art. That show will open on April 27 and run through May 25. A reception will take place from 2-5 p.m. April 27, with a talk by Cox at 3 p.m. Following the talk, a tour of Robert Hutton’s studio and a final preview of his mural for the MU Lab School will be offered.

“After that, we’re going to box it up for the installation,” Robin Hutton said.

The gallery is otherwise open by appointment. To visit, schedule an appointment by contacting through their Facebook page or emailing rhutton@zoominternet.net.