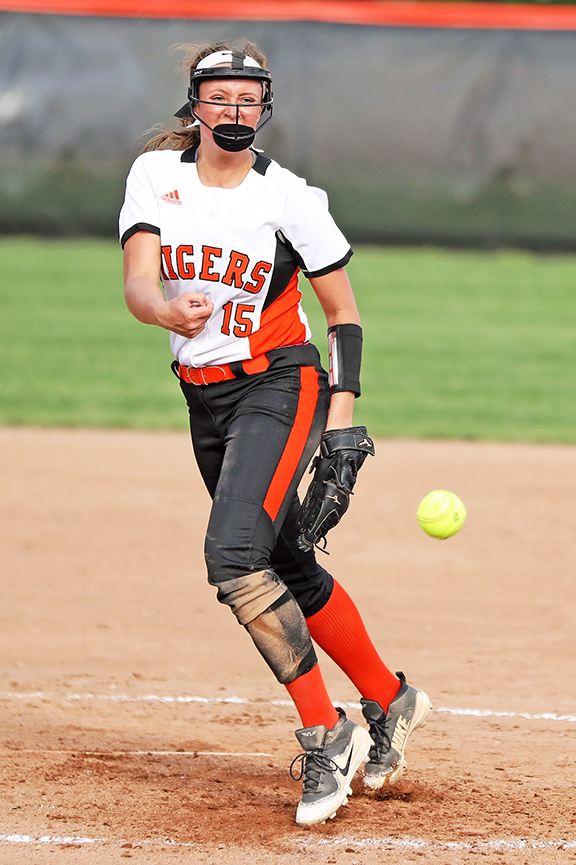 The key number here was “2.”
The Ironton Lady Fighting Tigers’ Mary Beth Burton pitched a two-hitter and five different players hit doubles in a 10-0 Ohio Valley Conference run rule win over the Portsmouth Lady Trojans on Thursday.
Burton struck out six and walked two while allowing just two singles.
Peighton Rowe, Taiya Hamlet, Demi Sands, Haylee Stevens and Burton all had doubles as Ironton got 11 hits.
“Mary Beth had a great night on the rubber and the defense played well behind her. She did well mixing her pitches up and hitting spots,” said Ironton coach Missy Fields.
“The girls are hitting well. Burton, Hamlet and Moore had multiple hits and five girls had doubles.”
Ironton (9-1, 5-0) went in front 2-0 in the first inning.
Burton reached on an error, Rowe doubled but Burton was then caught trying to steal home.
Hamlet — who went 3-3 — singled to score Rowe and moved up on a wild pitch where she scored on a hit by Keegan Moore who was 2-3 on the day with two RBI.
A run scored in the second when Kiandra Martin was safe on an error and scored on Burton’s double.
The Lady Fighting Tigers then scored five runs in the third to lead 8-0.
With one out, Hamlet doubled and scored on a hit by Moore. Riley Schreck was safe on an error and Stevens cranked a two-run double.
Kylee Richendollar was safe on an error as Stevens scored and Martin singled in the fifth run.
The final two runs scored in the fourth to set up the five-inning run rule.
Tamlet singled and scored on Demi Sands’ double. Sands went to third on an error and Schreck grounded out to drive in the run.
Portsmouth 000 00 = 0 2 5
Ironton 215 2x = 10 11 1
F. Phillips and Jacqueline Bautista. Mary Beth Burton and Demi Sands. W-Burton (K-6, BB-2). L-Phillips (ER-4, K-0, BB-0). Hitting-PHS: Jacqueline Bautista 1-2, F. Phillips 1-2; Ironton: Mary Beth Burton 2-3 2B rbi, Peighton Rowe 1-3 2B, Taiya Hamlet 3-3 2B rbi, Demi Sands 1-3 2B, Keegan Moore 2-3 2-rbi, Riley Schreck rbi, Haylee Stevens 1-3 2B 2-rbi, Kiandra Martin 1-2 rbi.