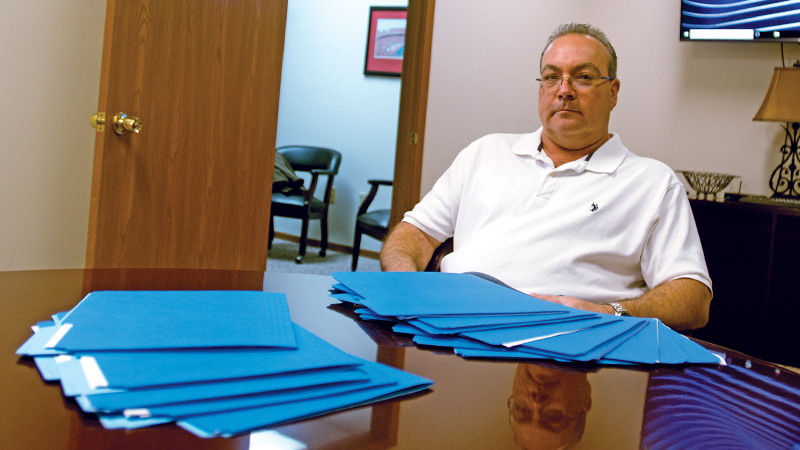 Lawrence-Scioto Solid Waste Management District enforcement officer Steve Hileman sits with a number of open dumping cases the solid waste district is pursuing in court. Last year, the LSSWD had 177 cases prosecuted. This year, they already have over 50 in the court system. (The Tribune | Mark Shaffer)

While there is a renewed attack on trash, litter and dumping in Lawrence County, the Lawrence-Scioto Solid Waste Management District has been in charge of enforcing the laws against it for years.

And sometimes, the cases of dumping and trash are so bad, people get sent to court for not cleaning it up.

Solid waste district enforcement officer Steve Hileman is the one in charge of investigating incidents and, if the offense is great enough, taking the case to the court system for prosecution.

“I’ve got a total of five cases in pre-trial, one before the grand jury and three bench warrants out,” he said, adding that several cases have been decided with people ordered to clean up the mess or fined or both.

Hileman said most of the cases start with a phone call to the solid waste district office.

“Usually, we get anonymous complaints. People will call in and need me to check it out. I’ll go investigate and, if necessary, I’ll issue a summons for them to appear in court for the charge of open dumping or littering,” he said.

Most of the cases are charged as open dumping, a felony under Ohio law.

“Many times the charges are reduced to third-degree misdemeanor littering,” Hileman said. “But many times, it doesn’t get reduced.”

He said the goal is to get the mess cleaned up and properly disposed of.

Last year, Hileman took 177 cases to court in both Lawrence and Scioto counties. This year, he already has over 50 cases.

Right now, Hileman is on the look out for whoever is dumping tires off county and township roads in Fayette County. From October to January, crews from the Ohio EPA removed 7,312 tires from 14 locations.

“I really need the public’s help with that one,” he said. “If anyone sees anything, give us a call.”

The phone number for the solid waste district is 740-532-1231. If it is after business hours, call the sheriff’s office to report the dumping.

Hileman said the Ohio State Highway Patrol and the road officers with the Lawrence County Sheriff’s Office are watching for people hauling tires around.

“I want to keep these tires from going over the hills,” he said. “It just dilapidates people’s property, it is just getting bad. That’s why we need the help of everyone to fight this problem.”