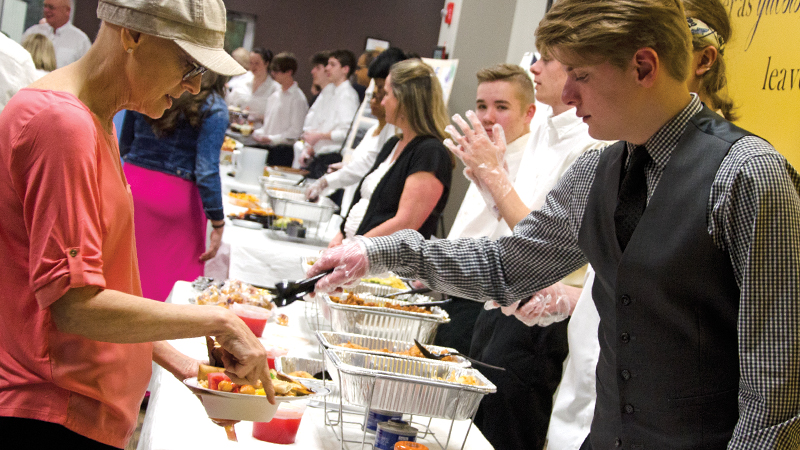 SOUTH POINT — The Tri-State STEM+M Early College High School will be wrapping up its second academic year this spring and, on Thursday, the community in Lawrence County came out to show their support of the institution.

Students served up food from local restaurants, representing a selection from around the world, including Casa Grande, Fratelli’s, the Coal Grove Freezette, China Wok, Navarino Bay, Surin of Thailand and Taste of Asia.

Gary Robinson, the school’s director, said all of the food was donated by the restaurants.

“All seven of them did, and we had those who sponsored tables and provided supplies,” he said. “They did this all for the benefit of the school.”

The school, located on Solida Road in South Point, is a public school, free to Ohio students and open to those from West Virginia and Kentucky for a tuition fee.

It specializes in science, technology, engineering, math and medical education.

The night featured two guest speakers, the first of whom was Dr. Salome Nnoromele, Associate Dean of Student and Academic Affairs at Ohio University Southern.

Nnoromele spoke of advances in science, including the news this week that scientists had produced the first ever photo of a black hole.

“This is what STEM represents — the ability to ask questions and to follow up on them,” she said of the process to bring about such achievements. “We find solutions and that’s how we make the world a better place.”

She explained her field to the crowd, and the various subfields within it, such as human paleontology.

Chirchir said those in that subfield can answer questions, such as when humans began walking upright.

“We go out into the field, find fossils and see if they have features like long limbs and curved spines,” she said. “We go into the past and see those changes and we see the emergence of a gait similar to ours about two and a half million years ago.”

She said biological anthropologists can also include those who study skeletal anatomy.

“They can identify people’s remains for legal purposes,” she said, citing the television series “Bones” as an example of that work.

Concluding the event was student Anna Holman, who will be among the school’s first graduates.

“This place we’ve been able to create these last two years has been exceptional,” she said, citing the school’s performance on recent statewide testing, where STEM+M received an A for Gap Closing and scored a B for Achievement, the highest in the county.

Holman said students are “past time for settling for metal desks that look like every other room in the building,” and touted its focus on problem solving and hands-on learning, rather than the traditional classroom set up.

“We’re prepared to go out and succeed at any level — local, national and globally,” she said, describing the school as “a family dedicated to excellence.”

Robinson said the school currently has about 100 students, up from 70 last year and he expects that number to continue to increase and for support from the community and leaders to grow.

He said the school will see a visit from state government in May, when Lt. Gov. Jon Husted visits the campus.