Cremeens, Webb off to good start at Rio 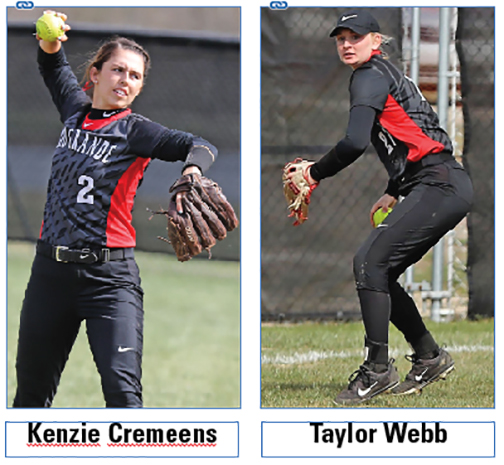 RIO GRANDE — Not bad for a couple of rookies.
Although they are just freshmen on the University of Rio Grande RedStorm softball team, former Ironton Lady Fighting Tiger Kenzie Cremeens and Symmes Valley Lady Vikings’ Taylor Webb are adjusting very well to the next level.
Rio Grande is currently 24-10 and 12-0 atop the River States Conference.
Cremeens — a catcher who can play some first base — is batting .270 with a team and conference leading 10 home runs and 30 runs batted in.
Twice this season Cremeens has belted two home runs in a game.
Cremeens is also 5-of-5 in stolen bases and tied with junior Michaela Criner who is 5-of-6 in team steals.
Cremeens has played in 34 games and started 32. Her .590 slugging percentage is second on the team and seventh in the conference. Criner leads the team and league with at .735.
Webb is making a little noise herself.
The freshman outfielder has started 29 of the 30 games she’s appeared and is currently batting .322 with seven doubles and 13 runs batted in.
Her batting average is 18th in the conference while Criner leads the league at .393.
Webb’s seven doubles rank 18th in the league as well, just one behind team leader Criner.