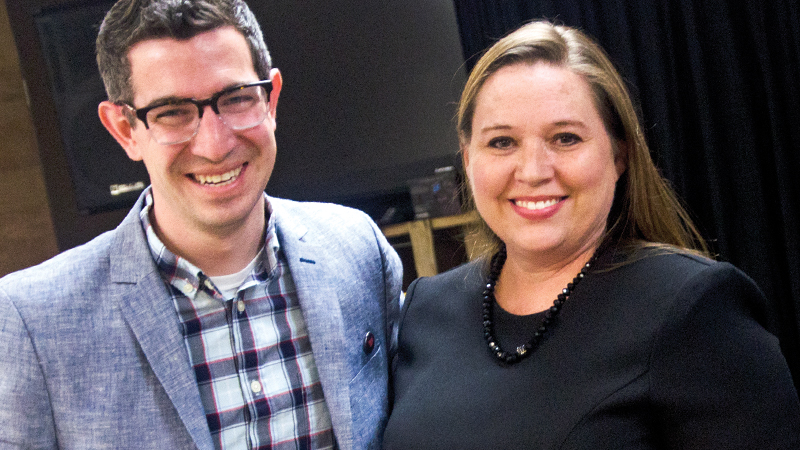 Jonathan Juravich, the 2018 Ohio Teacher of the Year and Ohio Department of Education’s current teacher in residence, presented Alicia Spears, the lead instructor of the Tri-State STEM+M Early College High School with one of the inaugural Teachers of Ohio Representing Character and Heart (TORCH) Awards. (The Tribune | Heath Harrison)

SOUTH POINT — The lead teacher at the Tri-State STEM+M Early College received a prestigious honor from the state of Ohio on Thursday.

Alicia Spears was presented with the Teachers of Ohio Representing Character and Heart (TORCH) Award by the Ohio Department of Education at the school’s annual International Dinner, which took place at Tri-State Worship Center in South Point.

Jonathan Juravich, who is the 2018 Ohio Teacher of the Year and current teacher in residence for the Ohio Department of Education, presented Spears with the award.

He said nominations for the award, in its first year, were sent in from across the state and five recipients were chosen.

As Spears was the first recognition of the year, she is the award’s inaugural recipient overall.

He said the nominator for Spears wrote, “This teacher is the most enthusiastic, dedicated and passionate teacher I have ever seen. They not only create an exceptional learning environment for their students, but also one for the other teachers as well.”

Juravich said Spears has “encouraged students to strive for greatness, then give back to the community.”

“This TORCH recipient has taken on many more roles at STEM+M Early College High School than they could ever have dreamed,” he said. “But they do so with passion and a belief in the limitless potential of their students and fellow teachers. This teacher works with less-experienced educators on a weekly basis in co-teaching roles, to support and grow them as future teacher leaders. All of this and more is why Alicia Spears is a the Teacher of Ohio Representing Character and Heart.”

Spears, who said the award came to her as a surprise at Thursday’s dinner, said the honor’s name had “a double meaning” for her.

She spoke of Dr. Scott Howard, who was the school’s CEO, but passed away prior to its opening.

“When Dr. Howard died, the school did not have a standing logo,” she said, suggesting that a torch could be used to symbolize carrying on his legacy.

“We were passing the torch,” she said.

Spears, who is nationally board certified in physics, has been lead instructor at the school since its 2017 opening and is wrapping up her second academic year there.

Previously, she taught chemistry and physics at Chesapeake High School.