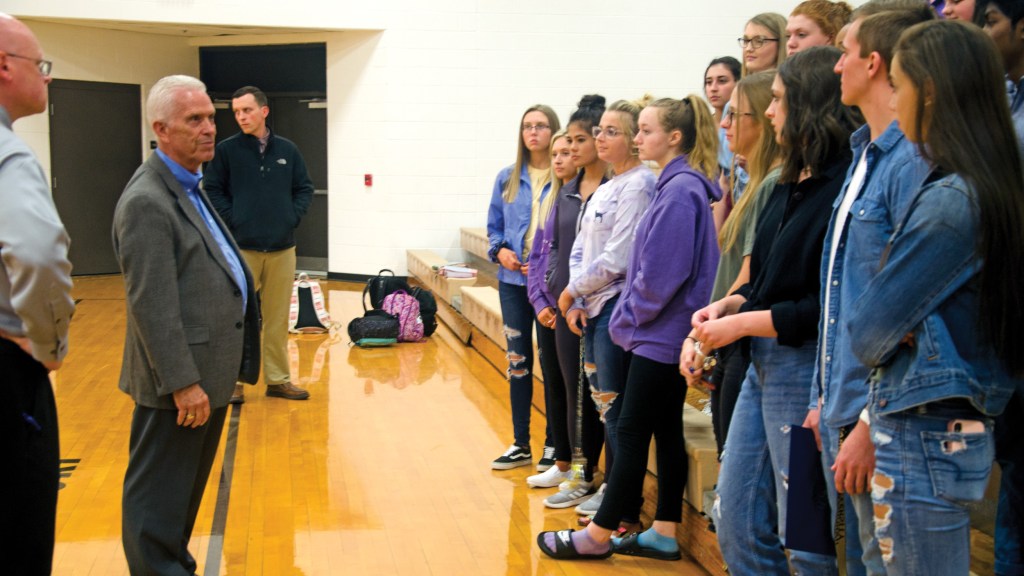 CHESAPEAKE — Throughout this school year, members of Chesapeake’s student council have had visits from local, county and national leaders to learn about leadership and, on Monday, the series wrapped up with a presentation from the region’s congressman.

U.S. Rep. Bill Johnson, R-Ohio, spoke at an assembly before the school’s entire student body, in which he recounted the formative events of his life and offered words of encouragement to the teens gathered in the gymnasium.

“Every one of you is a leader,” Johnson said. “The question is – what kind of a leader will you be. If this mule farming plowboy can do it, so can you.”

He recalled the contributions of those from the state.

“Folks, Ohioans have always been leaders,” he said. “Seven of our presidents — 15 percent of them — came from Ohio. We’ve got a lot to offer. Something just makes us special. We solve problems, don’t give up and stay the course.”

Johnson spoke of perseverance and offered the story of Milan native Thomas Edison, who was once asked how he dealt with the failures leading up to the invention of the incandescent light bulb.

He spoke of Ulysses S. Grant, who led Union forces as a general in the American Civil War. Johnson said that many urged President Abraham Lincoln to get rid of Grant, viewing him as “a drunkard,” yet his victories on the battlefield convinced the president otherwise.

“Lincoln said, ‘Find out what kind of whiskey Grant drinks so I can give it to all my other generals,’” Johnson said.

Johnson went through a list with the students, citing achievements of Ohioans including Edison, John Glenn, Neil Armstrong and Orville and Wilbur Wright.

This was Johnson’s second visit to the school this year. Earlier he met with members of the student council for a question and answer session. This was followed by visits from Ohio Supreme Court Justice Judi French, Lawrence County Coroner Ben Mack and Ironton Mayor Katrina Keith.

Johnson concluded the assembly by presenting those student council members with certificates for taking part in the leadership seminar.

He then handed out a final honor, the Future Leaders of America award, to Andrew Miller.

“That nomination comes from your school, not by me, and that makes it more important,” he said.

Johnson thanked the group for taking part and wished them well in their future after graduation next month.