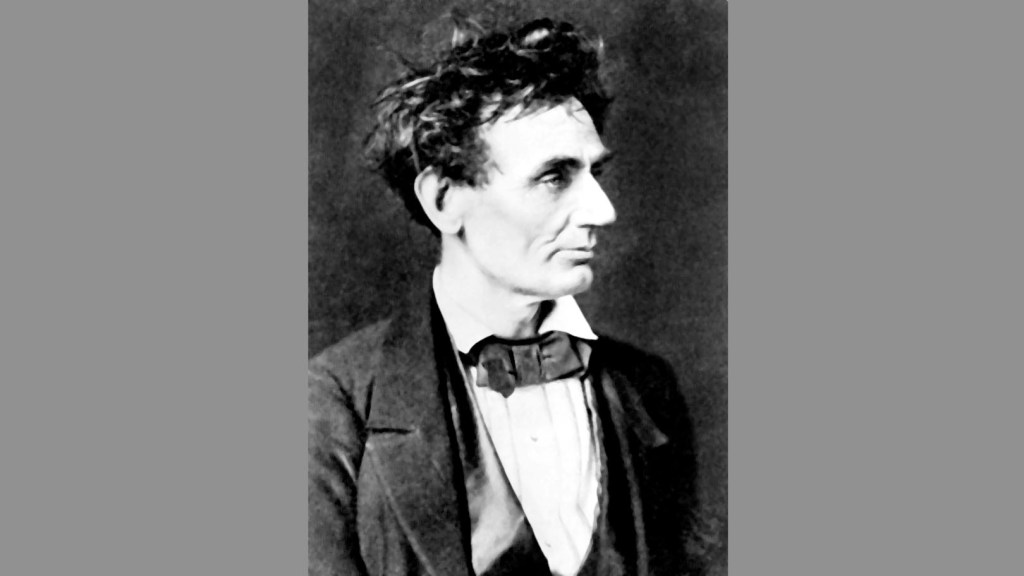 Library of Congress Abraham Lincoln is seen at age 48 in this 1857 portrait, taken three years before he ran for the presidency. Lincoln would not grow his famous beard until just before winning the White House.

This is the second of a two-part series on the life of Abraham Lincoln, who died 154 years ago this week

In 1830, Abraham Lincoln’s father, Thomas Lincoln, moved his family again. Leaving Indiana, they settled on the north bank of the Sangamon River, 10 miles west of Decatur, Illinois. Abe Lincoln, at age 21, was ready to declare his independence. He was 6 feet, 4 inches tall and would weigh 180 lbs.

He continued to cut wood, split rails, thresh wheat and earned his first significant pay rowing people out in the river to board steamboats.

In 1828, he was part of a crew that took a produce-laden flatboat to New Orleans. Here, he saw the cruelty of slavery in the south firsthand.

He was slowly turning against helping his father farm. Lincoln was hired as a store clerk at New Salem, Illinois, where he developed an interest in politics. During the five years in New Salem, Abe became village postmaster and deputy surveyor of the county. In 1834, Lincoln began the first of four successive two-year terms in the Illinois state legislature. He was urged to study law and became a lawyer. He sometimes walked 20 miles to Springfield to borrow law books to study. He was totally self taught.

In 1846, Abraham Lincoln was elected to the U.S. House of Representatives, where he ruined his re-election by accusing President James K. Polk of provoking a war with Mexico. He thought his political career was at an end, but the Kansas-Nebraska Act of 1854 inspired him to publicly protest the spread of slavery.

In 1856, he joined the new Republican Party that stood for “no more expansion of slavery.” Lincoln, had been a member of the Whig Party. In 1858, his party nominated him to run against Stephen Douglas for the United States Senate.

Lincoln challenged Douglas to seven debates throughout Illinois. Although he lost his bid for the Senate seat, the debates made Lincoln a nationally-known figure. In May 1860, this prairie lawyer was nominated by the Republican Party for the presidency, as Ohio gave him four votes to secure the nomination.

Lincoln won the election of 1860, despite receiving only 39 percent of the popular vote. Southern states left his name off the ballot. Lincoln had to sneak into Washington, D.C., due to rumors of assassination.
Had he not had success in politics, Abraham Lincoln had thought seriously of becoming a blacksmith because of his great strength. Previously, during the 1830s, he could outrun, outlift, and outwrestle any man in his area of Illinois. He once, in his younger days, lifted a 600-pound chicken coop and moved it by himself to another location.

On his way to be inaugurated president, he stopped in Westfield, New York, and called out the name “Grace Bedell.” Shortly before the election of 1860, the 11-year-old girl wrote him a letter and advised him to grow a beard because his face was too thin. At Westfield, Lincoln’s train stopped and showed his beard to Grace.

As president, Lincoln would face a challenge (a civil war) greater than any president before him — even George Washington in 1789!

Certain southern states had vowed to leave the Union if Lincoln was elected in 1860. Of the 15 slave states, 11 formed the Confederate States of America and would wage a bloody war to defend their institution of slavery and states’ rights.

Most people felt Lincoln incapable of keeping the United States together as one nation. The American Civil War lasted nearly four years. There were 10,000 military confrontations and both sides combined saw 620,000 deaths. Lincoln’s only military experience came in 1832 in the Black Hawk War. He was elected a captain and served 90 days, but saw no fighting. During the civil war, he would study Napoleon’s battle tactics at night. He had great difficulty finding a general who would fight and win battles.

This president had to wage many personal battles not associated with the Civil War. Little Eddie Lincoln, almost four years old, died in 1850 of tuberculosis. The Lincolns’ pride and joy, William Wallace Lincoln, 11, dies in 1862 of typhoid fever. Lincoln’s wife, Mary Todd, held séances to communicate with her dead sons. The Lincoln’s youngest son, “Tad,” had a partially cleft palate and harelip and could do no wrong in the eyes of President and Mrs. Lincoln.

Mrs. Lincoln overtravelled, overspent and overindulged herself as first lady. She exceeded her congressional allowance ($20,000) to refurbish the White House by $6,000. This upset the president, because he knew some of his soldiers had no blankets. Mary Todd was also accused of being a Confederate spy. The war years overaged President Lincoln and he lost 30 pounds.

Lincoln’s father, Thomas, has asked him if he could visit him. The son said such a visit would be “painful.” Abe did not attend his father’s funeral and Thomas never met Mary Todd nor his grandchildren!

Late in the afternoon of April 14, 1865, the Lincolns went on a carriage ride. The president told Mary he would like to return to Illinois and practice law. That night, they went to Ford’s Theater, President Lincoln’s main diversion from wartime stress.

Fourteen people turned down invitations to accompany them to the theater. This was the last play Lincoln would ever attend.