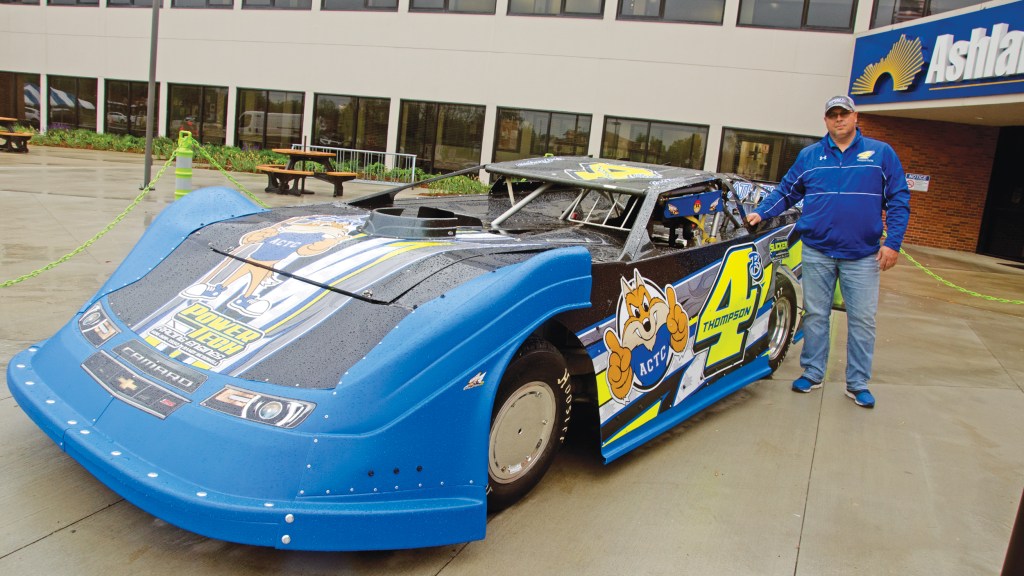 The Tribune/Heath Harrison (ABOVE) Greg Thompson, a racer from Ironton, is sponsored by Ashland Community & Technical College. His car, featuring the school’s logos, will debut on the track on May 11 in Portsmouth. (BELOW) The front hood of Thompson’s race car featuring the logo of sponsor Ashland Community & Technical College. 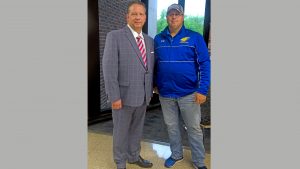 The Tribune/Heath Harrison
Dr. Larry Ferguson, president of Ashland Community & Technical College, with racer Greg Thompson, of Ironton. ACTC is sponsoring Thompson’s car and Ferguson said it will serve as an ideal way to promote the school.

College is sponsoring car, which debuts at May 11 race

Ironton resident Greg Thompson has been racing for 30 years and recently returned to the region.

“I spent the last five years down south,” he said. I was racing in Georgia — in a modified open well, late model car — and just came back last year.”

On Friday, he was at Ashland Community and Technical College with his car, freshly painted with the school’s logos and its slogan of “Find your own path.”

“I was fortunate enough to pick up an excellent sponsor in ACTC,” he said.

Dr. Larry Ferguson, the school’s president, said one of the faculty members at the school brought up the idea of doing a sponsorship.

He said it fit in perfectly with the school’s STEM curriculum, pointing out the science of things such as the spoiler on a car and how it works.

He said it will help to expand the appeal to prospective students.

“Kids may not know what STEM means, but most all of them will understand what this car means,” he said. “It will get them really excited.”

Ferguson said the sponsorship was a first for ACTC.

Thompson, who works for Boyd County schools, said when he is not racing, he likes to ride his Harley and watch his grandchild play sports.

He said the car will see its first race on May 11, at the opening event for the year at Portsmouth Raceway.