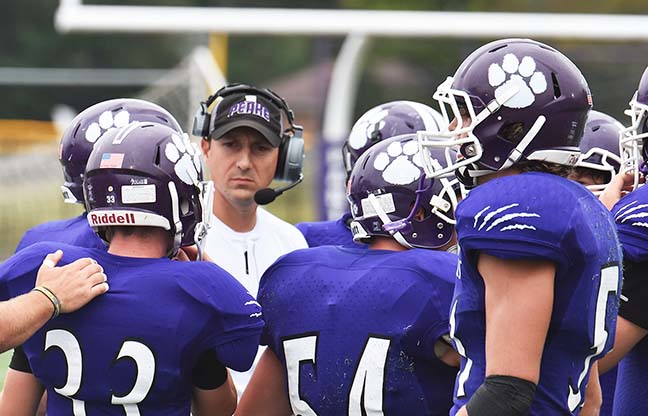 Andy Clark talks with his team during a timeout. Clark resigned as the Chesapeake Panthers’ head coach to accept another position. (Kent Sanborn of Southern Ohio Sports Photos)

CHESAPEAKE — The Panthers have lost their leader of the pack.
Chesapeake head football coach Andy Clark has resigned as coach and teacher in order to accept another job.
Clark has been hired as athletic director at Fairfield Union High School.
“It’s a new full-time administrative position at the school. It kind of came to me. I wasn’t looking. I interviewed and was hired,” said Clark.
At Chesapeake, Clark compiled a 44-29 record in eight seasons at his alma mater. His teams qualified for the postseason playoffs three times.
His teams finished .500 or better all but two seasons.
Clark’s wife Mindy, who has a Master’s degree in business and a teacher in the Fairland school system, was hired by the Department of Defense.
“This thing kind of fell in her lap,” said Clark who played for Morehead State University.
“It’s tough to move, but it was an opportunity that we couldn’t pass up.”
The Clarks have two sons, Hunter and Dean.