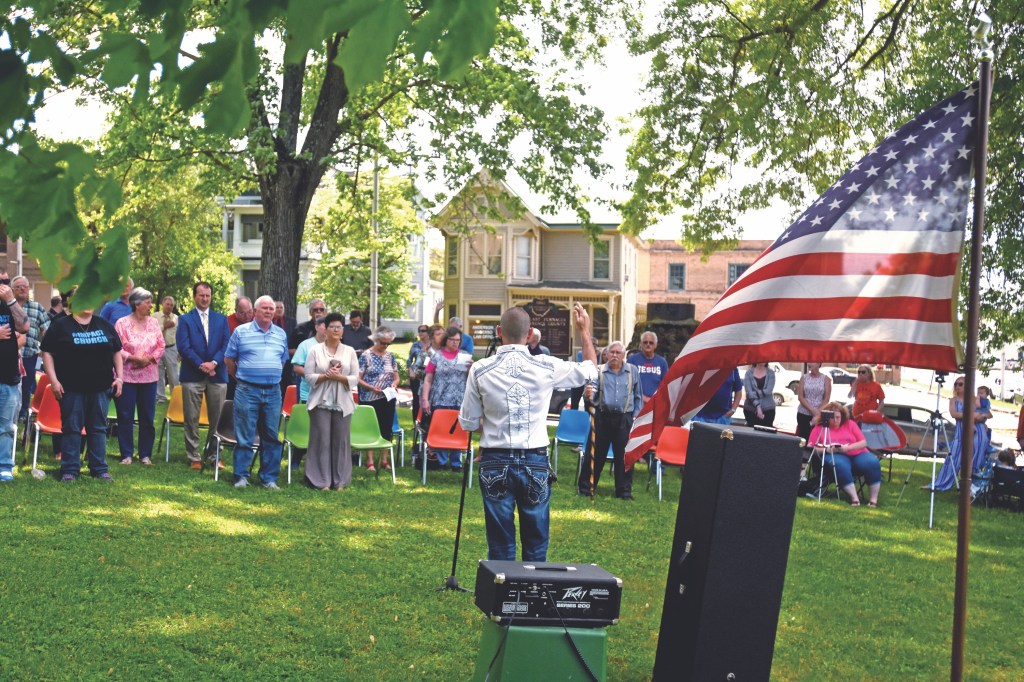 (The Tribune/Mark Shaffer) Joshua Jannatta leads the crowd is the singing of “God Bless America” on Thursday afternoon during the National Day of Prayer held on the lawn of the Lawrence County Courthouse in Ironton.

The rains held off and a crowd of around 80 gathered on the lawn of the Lawrence County Courthouse for the local celebration of National Day of Prayer. The theme this year was “Love One Another.”

Seven local pastors lead prayers for different aspects of American life including those in government, those serving in the military, those in the media and the arts, local businesses, those who educate our children, for the body of the church in the U.S. and for Americans to follow the Bible.

Terry Jones, the pastor of Resurrection Hope Methodist Church and secretary of the Ironton Ministerial Association, said they were pleased with the turn out for the 31st year of the annual event.

“I love the turnout today, it was really good,” he said. “The weather worked for us this year. We had some heavy storms this morning but it turned out pretty nice this afternoon.”

Lawrence County Commissioner Colton Copley, who attended the ceremony with his wife and kids, said they were happy to let them use the site.

“I think it is important for people to have their religious freedom and worship God,” he said, adding that he was raised as a strong Christian. “We are all here because God created the heavens and the earth. To come out and pray on the National Day of Prayer and ask for his blessing on our county is something that is special. We in Lawrence County are a strong Christian community.”

After the prayers, the Ironton Ministerial Association had hot dogs, chips and drinks for those in attendance. Many people stayed and talked long after the event was over.

In 1988, the law was unanimously amended by both the House and the Senate and signed into law by President Ronald Reagan on Thursday, May 5, 1988, designating the first Thursday of May as a day of national prayer.