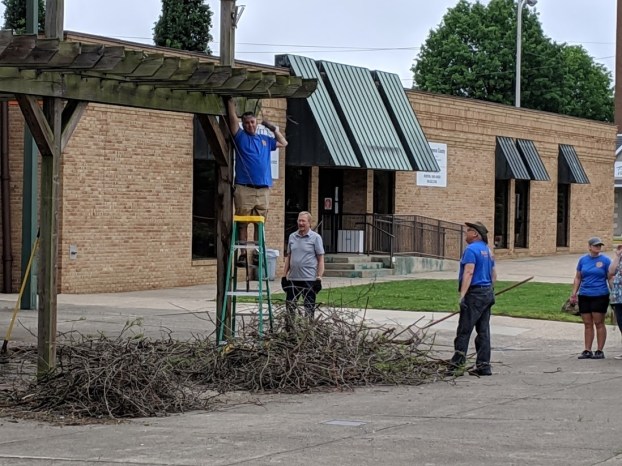 (The Tribune/Sarah Simmons) Members of the Ironton Rotary Club remove vines on Saturday as part of Ironton's "Team Up To Clean Up" event.

On Saturday, many civic groups and others were cleaning up downtown Ironton as part of the city’s “Team Up to Clean Up” project.

“It was absolutely amazing,” said Mayor Katrina Keith, adding she was very excited by the turnout. “We had women from the Land of Goshen painting the bridge on North Second Street. Members of the Ironton football team and the Buccaneers football team were digging up tree boxes and weed eating the overpass. We had council members show up this year. We also had members of the AFSCME union helping out.”

“It was an excellent group and we got a lot accomplished this year,” Keith said.

She said she doesn’t have a count of how many bags of trash were collected but she and Flood Department superintendent Mike Pemberton picked up over 30 bags on just Center Street.

As part of the citywide cleanup, there are dumpsters available this week until Saturday for Ironton residents to dispose of one truckload of junk for free.

The dumpsters are located at the Orchard Street area by Stormes Creek Bridge. The bins are behind a gate and people will have to show proof of city residency with an ID card or Ironton utility bill. Keith added there are some things that cannot be dumped including electronics, tires, batteries, gasoline, paint or any other harmful byproduct. Construction materials will not be accepted either.

People with electronics like TVs, computers and printers can take them Saturday to the Lawrence-Scioto Solid Waste Management District’s electronic waste and document shred day event at the Ironton Hills Plaza.

Solid waste district executive director Dan Palmer said the event is an opportunity for Lawrence County residents to properly dispose of their electronics, such as cell phones, computers, key boards and copy machines. People can also have any sensitive documents shredded and disposed of.

Keith also reminded people that now that there has been a clean up and dumpsters available, next week will come the accountability part of “Team Up to Clean Up.”

Next Monday, crews will canvass the city looking for trash and debris in people’s yards and alleyways and they will be asking them to clean it up. If not, they will be cited into Ironton Municipal Court to discuss the matter with the judge.

“I want people to really understand the enforcement part comes next,” Keith said. “We have given them an opportunity to get rid of the stuff for free. We are offering many opportunities to get rid of their stuff. It will no longer be tolerated that people dump their stuff out in the alley.”