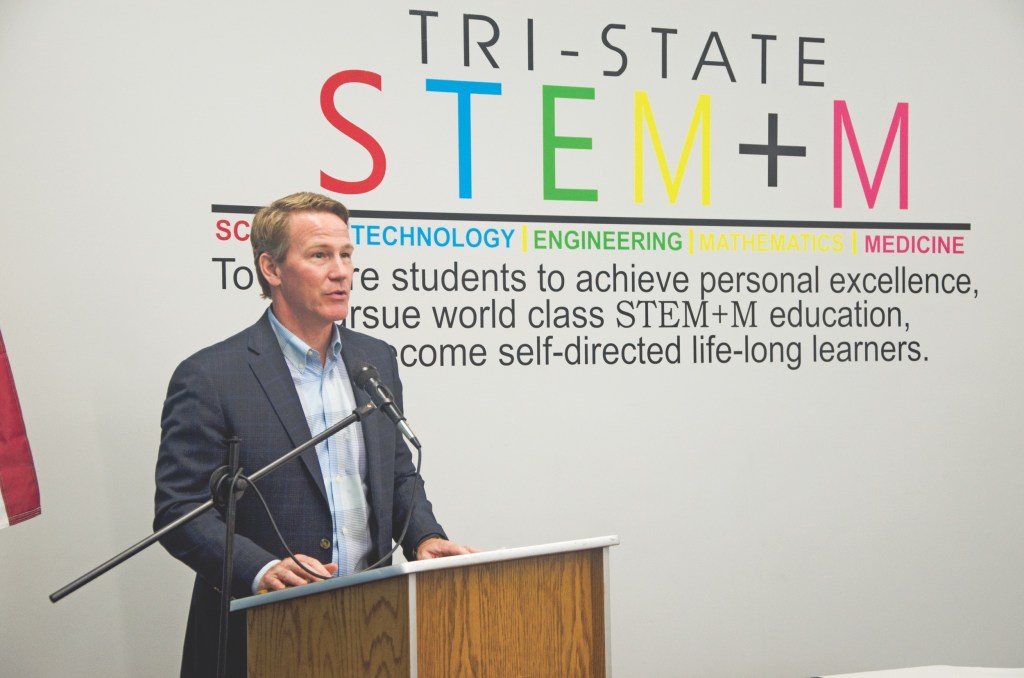 “We’re highlighting the great job opportunities out there with employers in the state,” Husted said in his stop at the school, located on Solida Road in South Point. “We’re helping people understand where they can go to drink the water of education.”

“These three go together and that’s an education,” he said. “You develop the whole person.”

He said STEM education is particularly important to him and he had made it a point to visit schools in the state that focus on it. He said it has been a priority since his time in the legislature.

“When I was speaker of the House in 2007, I sponsored legislation to create the STEM education network,” Husted said, stating, at the time, he feared emerging nations could be a threat to the U.S., because they “could outdo us in talent.”

He said in addition to STEM, he pushed for scholarships to get Ohioans to choose in-state education. He said studies have shown that most people either return home or stay in the area of their college when they begin working.

“If they’re educated at schools in Ohio, then we’re more likely to keep our talent in Ohio,” Husted said.

He said schools like STEM+M will help the U.S. compete in a “knowledge and innovation economy.”

Husted presented Alicia Spears, the lead teacher at STEM+M, with a certificate from him and Gov. Mike DeWine, honoring her for being the first recipient of the TORCH Award from the Ohio Department of Education, which she received in April.

He said he had learned during the tour of the school that many of its students had already earned as many as 60 hours of college credits in their classes.

“That’s amazing,” Husted said. “And it makes college a lot more affordable for them. What you’re doing here is fantastic in helping these students get a head start on life.”

Following Husted’s remarks, Bella Schraeder, a student at the school, spoke about her experience.

“I know 100 percent that this is where I want to go,” she said, stating she had been in both a private school and a traditional public school before enrolling. “This has challenged me the most, and it has made learning so much easier.”

Shraeder, who was recently accepted for a summer program at Yale, was praised by Husted for her exceptionally high ACT score.

She said she did not like science when she was in eighth grade and originally took the ACT.

“I was more into math,” she said. “But my ACT went up nine points, just because of classes here. I’m very passionate about this school and I know there’s nothing in our area like it.”

Her son, Dr. Mike Dyer, a Proctorville veterinarian who served as county chair of Husted’s campaign with Gov. DeWine, introduced the lieutenant governor.

STEM education is also offered at Collins Career Technical Center, which is unaffiliated with the Tri-State STEM+M school. Its Project Lead the Program offers four-year engineering and biomedical courses in most of the county’s school districts.