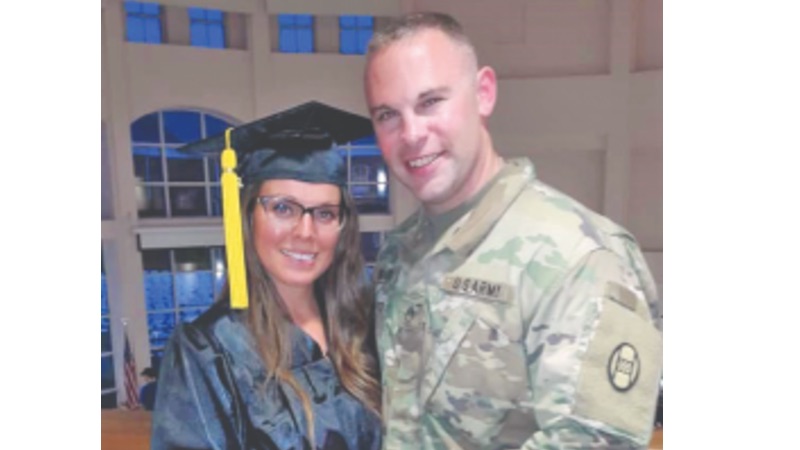 Ohio University Southern graduate Courtany Boyer was surprised by her husband, Staff Sgt. Adam Boyer, who made a trip up from North Carolina for the ceremony on May 2.

Graduation activities are typically full of hugs and happy tears. But, for one Ohio University Southern graduate, the occasion brought a little more emotion than usual last Thursday evening as the campus celebrated its 2019 graduate recognition ceremony.

Courtany Boyer was overwhelmed with emotion as she readied to put on her cap and gown to be recognized for completing the requirements for her Bachelor of Science in applied management degree.

The reason — her family concealed a surprise visit by her husband, Adam Boyer, a West Virginia National Guard staff sergeant, who obtained leave from Fort Bragg, North Carolina where he is stationed in pre-deployment status.

The couple embraced while the family and other onlookers watched in the lobby of the Bowman Auditorium, minutes before the ceremony began.

“I felt like my knees were going to buckle and my heart was going to burst when I saw him. I cried like a baby and just held him in my arms. I was so beyond happy and felt so loved,” said Courtany.

Adam said he could not miss his wife’s big day.

“I am beyond proud,” he said. “She is the first generation to graduate in her family and I’m just so very proud of her.”

The couple has been together for six years. Adam, an officer in the Huntington Police Department, said Courtany decided to pursue her degree in applied management at Ohio Southern “to work toward a more safe career.”

Courtany had worked as a Lawrence County deputy sheriff/and corrections officer and is now a special deputy with the sheriff’s office. Adam said with both of them in public safety, they wanted to look for changes so both of them would not “be in the line of duty.”

Courtney said the main reason she decided to go back to finish her college degree was to illustrate to her four children the importance of education.

“That’s something you will have forever and you can do so much with career-wise,” she said.

As a mom of four children, ranging in age from 12 years old to 3 months old, Courtany said there were many obstacles facing her as she worked on her college studies: being a police and military wife, shuttling kids to sports and school activities, selling a home and preparing for Adam’s upcoming deployment.

She figured her children “won’t able to figure out an excuse not to go to college when the time comes,” after witnessing her complete her degree.

“He is absolutely incredible with all of our kids, biological and not biological — none of that matters in our household,” she said. “I want my kids to know that they have options, and I’ll do my best alongside my husband to lead them in the right path.”

Together, the Boyers try to stress to their children the importance of giving back to the community.

“By being in law enforcement, we try to not only show them that we can individually help make a community better, but also to show them the sacrifices that first responders and their families must make in order to make a difference in the lives of others,” Courtany said.

After celebrating his wife’s college accomplishments, Adam had to return to North Carolina to fulfill his military obligation. Courtany appreciated the efforts he and the family took to surprise her.

“Apparently, my husband found out weeks before that he was able to come to the ceremony, but didn’t want to tell me because military orders can be so unpredictable,” she explained. “He told my sister and brother-in-law, and an aunt from Nashville who came to watch me graduate and they kept the surprise very well. My sister even went as far as telling me ‘I can video chat him if he has time during the ceremony so that he can see you graduate’ to help keep the surprise visit under wraps.”