Redmen work together in win over Portsmouth Clay 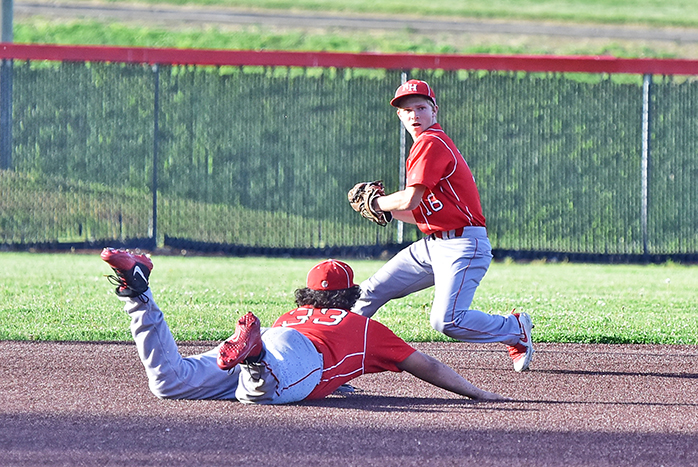 Rock Hill Redmen third baseman Kadin France dives but can’t quite make the stop, but shortstop Jake Blagg comes up with the baseball and throws out the runner during a 9-4 win over Portsmouth Clay On Wednesday. (Kent Sanborn of Southern Ohio Sports Photos)

PEDRO — All Together Now.
That’s not just a simple fun song by The Beatles. The Rock Hill Redmen were all together in their goal on Wednesday as they beat the Portsmouth Clay Panthers 9-4 on senior night.
“It was a good team win. Everyone contributed like they have all year. The seniors provided the leadership tonight and the entire year like seniors are supposed to do,” said Redmen coach Barry Litteral.
“We walked too many in the first few innings, but (Landon) Smith came on in the third inning and pretty much shut them down.”
After starter Nick Blankenship had a rare moment and struggled with his control Landon Smith came on in the fourth inning and finished to get the win.
Smith struck out five, gave up three hits, one run and no walks.
Clay (18-5) took a 1-0 lead in the top of the first inning.
With two outs, Reece Whitley singled, Dakota Dodds and Jaden Jesse walked to load the bases and the run scored on a wild pitch.
Rock Hill (17-5) came back to tie the game in the bottom of the inning.
Seth Nichols walked, Logan Hankins singled him to third and Kaleb Kidd hit a sacrifice fly.
The Redmen took the lead with two runs in the second.
Smith walked, Nick Blankenship singled, Jordan Griffith put down a sacrifice bunt, Braydon Friend had an RBI single and Jake Blagg squeezed home Blankenship.
Clay took a 4-3 lead in the top of the fourth.
Bryce Toomire walked, Evan Woods doubled and Clay Cottle doubled in the runners. Dodds followed with an RBI single.
Rock Hill answered with four runs in the bottom of the inning.
Smith singled, stole second and took third on a wild pitch. Blankenship was safe on an error and stole second and Griffith singled home Smith.
Friend had an RBI single and a wild pitch and an error on the play scored Griffith and a throwing error back to the plate scored Friend.
The Redmen added a pair of insurance runs in the sixth.
Blagg singled, Nichols walked and pulled off a double steal. Nick VanKuren squeezed home Blagg and was safe on a throwing error. Kadin France followed with an RBI double.
Blankenship was 2-3 and France 2-4 as the Redmen had 10 hits.
Ports. Clay 100 300 0 = 4 7 3
Rock Hill 120 402 x = 9 10 1
Reece Whitley, Clay Cottle (4), Jaden Jesse (6) and Bryce Toomire. Nick Blankenship, Landon Smith (4) and Kaleb Kidd, Seth Nichols (4). W-Smith (IP-4.0, H-3, R-1, ER-1, K-5, BB-0). Blankenship (IP-3.0, H-4, R-3, ER-3, K-4, BB-5, HBP-1). Hitting-Clay: Evan Woods 1-3, Clay Cottle 2-4, Reece Whitley 2-4, Dakota Dodds 1-3, Bradley McCleese 1-3; RH: Jake Blagg 1-4, Logan Hankins 1-3, Kadin France 2-4 2B, Landon Smith 1-3, Nick Blankenship 2-3, Jordan Griffith 1-2, Braydon Friend 2-3.