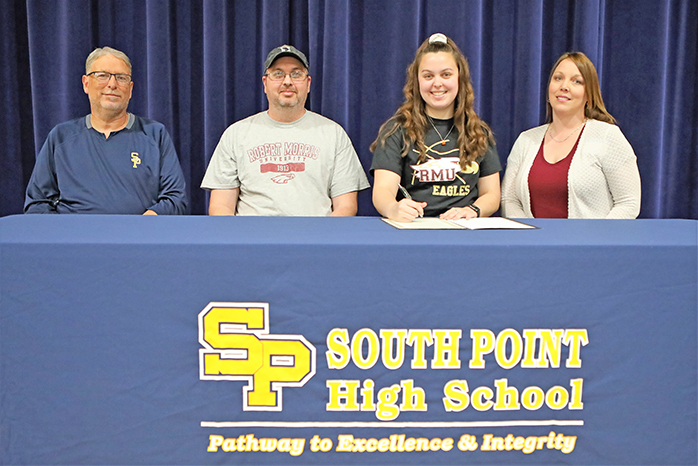 SOUTH POINT — When Kate Mundy decided to use her app, she might have thought it was short for “App-solutely.”
The South Point Lady Pointers’ senior basketball standout was looking to further her playing career at the college level.
Mundy said she signed up for some of the basketball recruiting apps and filled out a form on the Captain’s U site.
The app led her to connect with Robert Morris University in Illinois where she found the school and program she absolutely was looking for.
“I got an email from (Eagles coach Al Bruehl). I’m really interested in you as small forward and I’d really like for you to come and visit.’ So, I did as soon as I could,” said Mundy.
Mundy visited the school just before the school’s summer break and talked with some players regarding the routine and how things are done in the program and school.
“I went to visit the gym and saw how they did things,” said Mundy.
Robert Morris is an NAIA program and a member of the Chicagoland Collegiate Athletic Conference.
The 5-foot-9 Mundy is expected to play small forward.
“(Bruehl) thinks I could compete for a starting position and I’m willing to give it my all to be able to start. I think that with my capabilities I could,” said Mundy.
Growing up, Mundy split her playing time as a small forward and post player. But Mundy suffered a knee injury during a tournament game her sophomore year.
“That kind of changed her game. She kind of went to an inside player. She was kind of inside out before. She’s always been able to run the floor,” said Lady Pointers’ coach Dave Adams.
“She’s good rebounder. She’s really basketball smart. That’s probably her best thing. She can shoot. She can shoot inside and make the 3. She has a lot to contribute. Her knee injury set her back as far as high school.”
Mundy returned her junior year to play but focused on playing in the post with her back to the basket.
“My knee is really good now. I can work on some strengthening which I’m going to do this summer,” said Mundy. “I feel comfortable being another post player because that’s what I was most of my life, so I can easily transition from being a guard outside the 3-point line to being in the paint.”
Mundy said she is working on her outside shooting again but is not abandoning her inside game.
“I need to increase the distance a bit. I’ll continue to work on post moves. I’m comfortable with my ballhandling. I need to work on my speed and footwork more which is not that hard to do,” she said.
“She’s excited to get to play at the next level and that’s what she’s looking at right now,” said Adams.
Mundy plans to major in Applied Health Science that she said will lead to her doctor of Physical Therapy.

Redmen work together in win over Portsmouth Clay