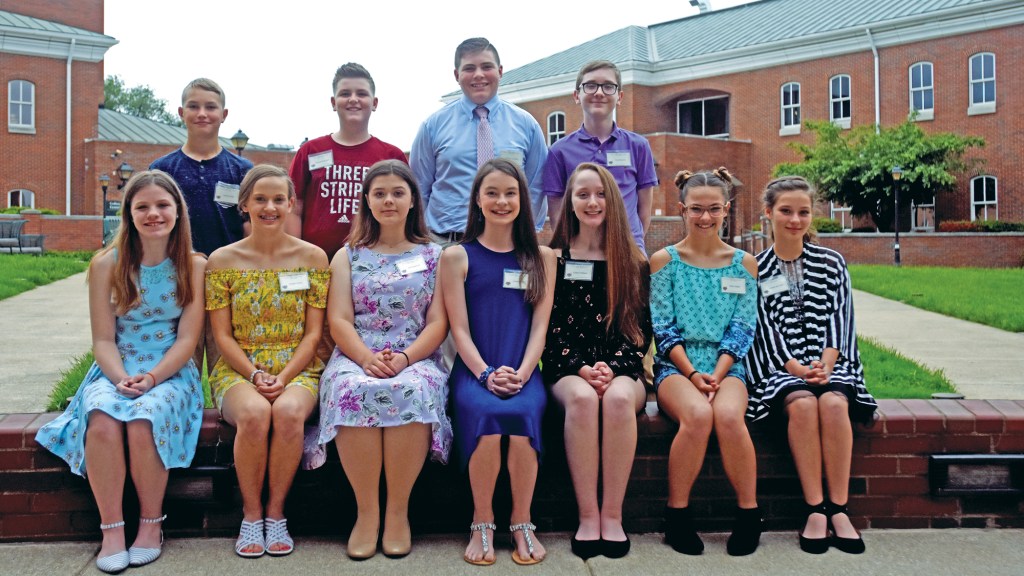 The Tribune/Mark Shaffer On Thursday, 11 students and their family celebrated their winning the 2019 Eddy Test at a banquet held at Ohio University Southern by the Ironton Welfare Club. In the front row, from left, are Jada Boggs, Natalie Carter, Allison Shepherd, Londyn Haney, Kaitlyn William, Molly Walker and Annika McCown. In the back row, from left, are Landon Rowe, Peyton McKnight, Bowen Gossett and Tate Munion.

For nearly six decades, the Ironton Welfare Club has held the Eddy Awards, and this year’s 11 winners and their families were treated to a banquet at Ohio University Southern’s rotunda.

Each year the top 25 percent of all sixth-grade students at Ironton Middle and St. Lawrence Catholic schools are chosen to take the standardized test that covers reading, arithmetic, English literature, history, geography, science and spelling. Then those students scoring in the top one-third percentile are chosen winners of the Eddy Awards.

“We are here to celebrate you,” Ironton Welfare Club president Jane Davis said in her opening remarks. She said the test was originally called the Educational Achievement Award but over the years, it became known as the Eddy. The first test was given to 111 sixth grade students in 1961, 31 of them won an Eddy award.

“It was created to motivate educational excellence,” Davis said.

Among the proud parents was Ironton attorney Mark McCown, who won the Eddy Test in 1984. This year, his daughter, Annika, was among the winners.

“We are absolutely thrilled for her,” Mark McCown said. “Obviously, it is much tougher than when we were little. We’re immensely proud of her for the studying she has done and for the achievement.”

Annika McCown said she was a little surprised to be among the winners this year.

“I underestimated myself,” she said. And the day she took the test, she got a concussion. “And they dilated my eyes right before I took the test. So, I was surprised.”