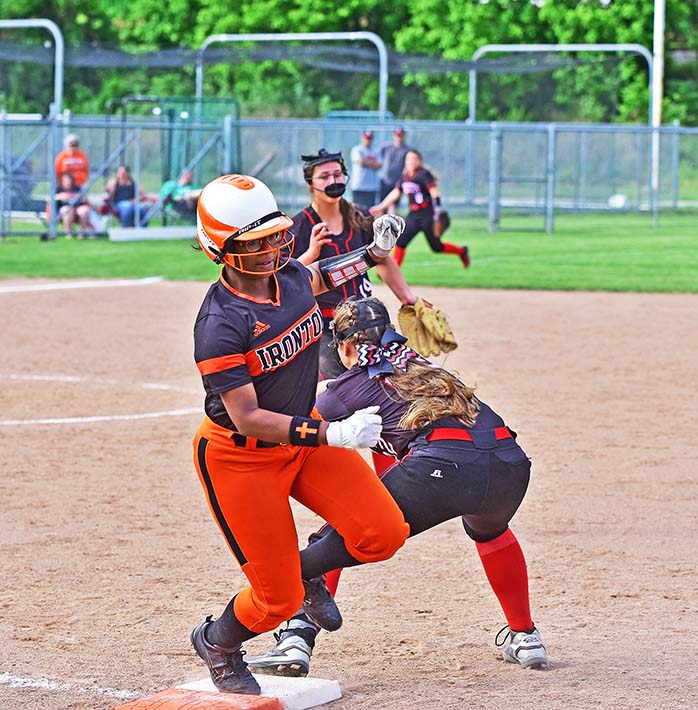 Victory always taste sweet, especially when it comes in the postseason tournament.
The Ironton Lady Fighting Tigers won the Division III sectional two years ago but were beaten in the sectional finals last season.
The Lady Tigers liked the taste of winning the sectional much better than the sour taste left in their mouths last season when they lost in the sectional finals.
The Lady Tigers found the tasty recipe again on Friday by beating the Coal Grove Lady Hornets 10-3 to win the sectional title.
Ironton (24-1) will play Chillicothe Huntington Ross at 6 p.m. Wednesday in the district semifinals at Chillicothe Unioto High School.
Keegan Moore pitched a four-hitter for the win. She struck out seven, did not walk a batter and all three runs were earned.
Ironton had 10 hits with Taiya Hamlet going 4-4 with a home run and three runs batted in. Kylee Richendollar was 2-3 with a home run and three RBI and Moore 3-4 with an RBI.
Kaleigh Murphy took the loss as she struck out two, walked one and half of Ironton’s runs were unearned.
After a scoreless first inning, Ironton cracked the scoreboard with two runs in the second.
Moore and Haylee Stevens both reached on errors and they pulled off a double steal
Riley Schreck grounded out to drive in Moore and Richendollar singled home Stevens.
Two runs scored in the third inning to make it 4-0.
Hamlet had a one-out single and stole second. Demi Sands reached on an error as Hamlet scored. Moore then doubled to drive in Sands.
Ironton put another deuce on the scoreboard in the fourth inning to make it 6-0.
Richardollar was safe on an error, Kiandra Martin put down a sacrifice bunt, Mary Beth Burton singled and Richendollar scored on an outfield error.
Burton stole second and scored on Hamlet’s two-out double.
The Lady Fighting Tigers seemed to like two-run rallies and got two runs in the fifth when Moore singled and Richendollar launched a two-out, two-run home run to center field.
Coal Grove avoided the shutout with three runs in the sixth.
Murphy got a bunt single, moved up on a wild pitch and scored when Jayden Griffith had a two-out single. Rylee Harmon then belted a two-run homer.
Ironton answered with — you guessed it — two more runs in the bottom of the inning on a walk to Burton and Hamlet’s two-run homer to center field.
Coal Grove 000 003 0 = 3 4 5
Ironton 022 222 x = 10 10 2
Kaleigh Murphy and Katie Deeds. Keegan Moore and Demi Sands. W-Moore (K-7, BB-0, ER-3). L-Murphy (ER-5, K-2, BB-1). Hitting-CG: Kaleigh Murphy 1-3, Jayden Griffith 1-3 rbi, Rylee Harmon 1-3 HR 2-rbi, Emily Carpenter 1-3 2B; Ironton: Mary Beth Burton 1-3, Taiya Hamlet 4-4 HR 3-rbi, Keegan Moore 3-4 rbi, Kylee Richendollar 2-3 HR 3-rbi.