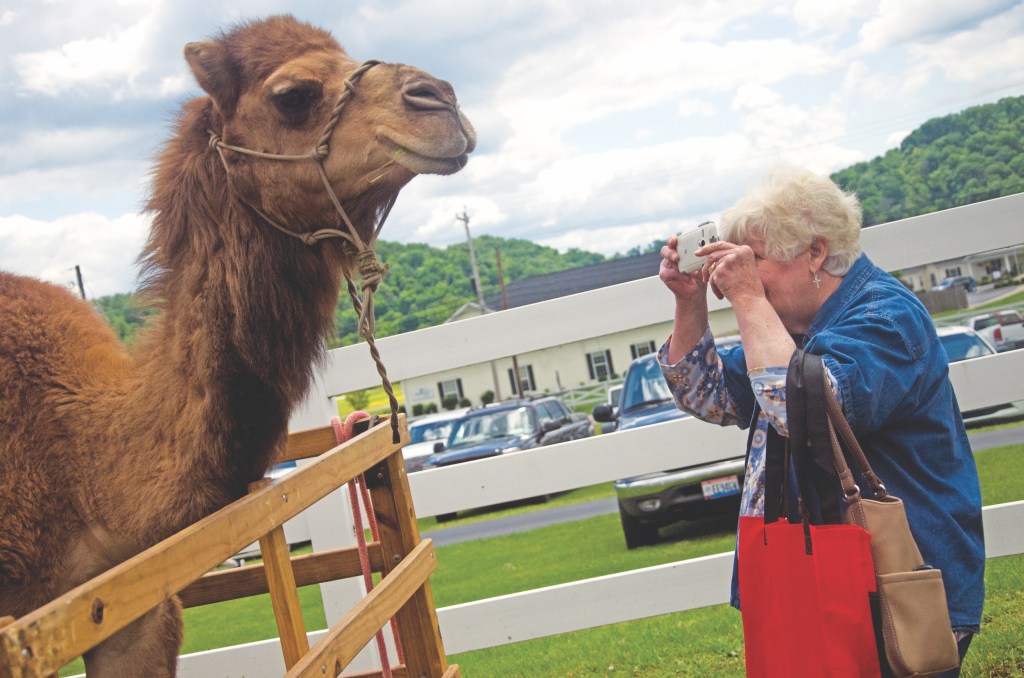 (The Tribune/Heath Harrison) Attendees take in the animals of the BARKer Farm Petting Zoo at the sixth annual Lawrence County Senior Day at the fairgrounds in Rome Township on Tuesday.

ROME TOWNSHIP — “What a great day!” Darlene Green, director of the Sybene-Chesapeake Senior Center, said of Tuesday’s Lawrence County Senior Day as it was wrapping up.

She estimated the event, now in its sixth year, drew between 2,000 and 2,500 attendees to the Lawrence County Fairgrounds over the course of its five hours of activities.

“This is our biggest yet,” she said, adding that she was thankful the weather had warmed up considerably since Monday when they were setting up.

The festivities featured food, music and more than 100 vendors.

Vendors included those geared toward seniors, with health-related booths, such as St. Mary’s Hospital, and local businesses, such as Ponderosa in South Point.

Collins Career Technical Center was set up, as they are each year, and the school’s cosmetology students offered free manicures to attendees.

One new addition was the BARKer Farm Petting Zoo, that had several animals on hand, such as Quincy, a squirrel monkey, Wally, a wallaby, and Barbie, an African-crested porcupine.

The event wrapped up with the regular meeting of the Lawrence County Commission.

“This is one of my favorite days of the year,” commissioner DeAnna Holliday said.

Holliday ran a cake walk at the event, for which the Proctorville Kroger had donated 100 cakes.

“Man, this is incredible,” commissioner Colton Copley, making his first visit to the event since being sworn in, said. “What an event for our seniors. To organize this many seniors, it’s amazing.”

Green said the next event for the senior center is their monthly Our Day luncheon, be on May 31 at First Baptist Church in Proctorville.