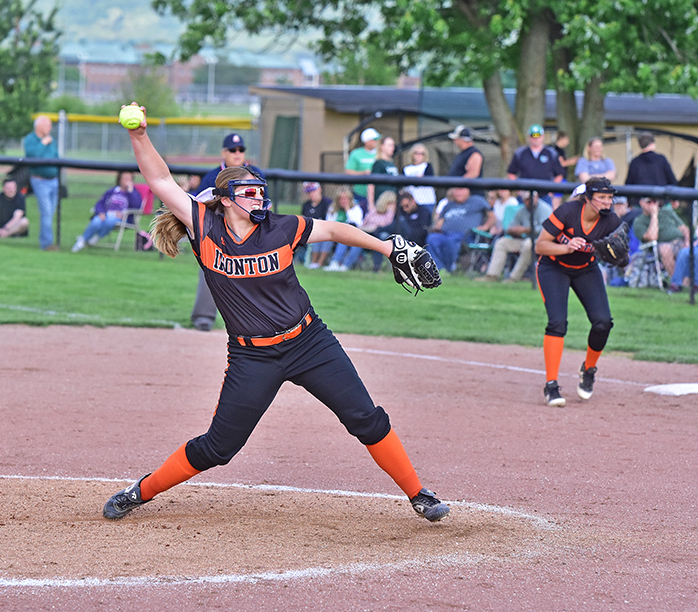 CHILLICOTHE — When you see “K. Moore” on the lineup card, the “K” could easily stand for “strikeout.”
But after Keegan Moore’s performance on Wednesday, it could also stand for “Kalm and Kool.”
Moore matched a season-high with 18 strikeouts as she pitched a three-hitter and the Ironton Lady Fighting Tigers edged the Huntington Lady Huntsmen 1-0 in the Division III district semifinals on Wednesday.
Moore did not walk a batter and pitched out of two scoring threats.
“Keegan Moore pitched a great game tonight,” said Ironton coach Missy Fields. “Even when Huntington threatened to score, she never got rattled. She had 18 Ks to tie her season high. That’s super in a district semifinal win.”
Ironton (25-1) will play at 11 a.m. Saturday in the district championship game against top-seeded Westfall. The winner advances to the regional tournament next Wednesday at Lancaster High School.
Ironton scored the only run of the game in the third inning.
Riley Schreck led off with a base hit to center field and promptly stole second. Kylee Richendollar then singled to left field as Schreck raced home.
“Schreck and Richendollar hit back-to-back shots giving us the run we needed to win,” said Fields. “I’m so proud of this group. They have each other’s back. Someone different steps up each game to help us get the win.”
When Huntington threatened, Moore stepped up big time.
The Lady Huntsmen got a runner to second base in the sixth when Madison Ackley reached on an error and moved up on a wild pitch.
However, Moore struck out the next three batters to end the inning.
Huntington threatened again in the seventh when Lillie Snyder and Brodey Entler singled to put runners and first and third with no outs.
But again, Moore fanned the next three batters to end the game, ignoring pinch-runner Phoebe Cockrell went to second on defensive indifference when there were two outs.
Ironton had five hits with Richendollar going 2-3.
Kylee Kellough struck out four and walked one in taking the loss.
Hunt. Ross 000 000 0 = 0 3 2
Ironton 001 000 x = 1 5 1
Kylee Kellough and Riley Black. Keegan Moore and Demi Sands. W-Moore (K-18, BB-0, H-3). L-Kellough (H-5, ER-1, K-4, BB-1). Hitting-HR: Lillie Snyder 2-3, Brodey Entler 1-3; Ironton: Demi Sands 1-3, Keegan Moore 1-3 2B, Riley Schreck 1-3, Kylee Richendollar 2-3 rbi.