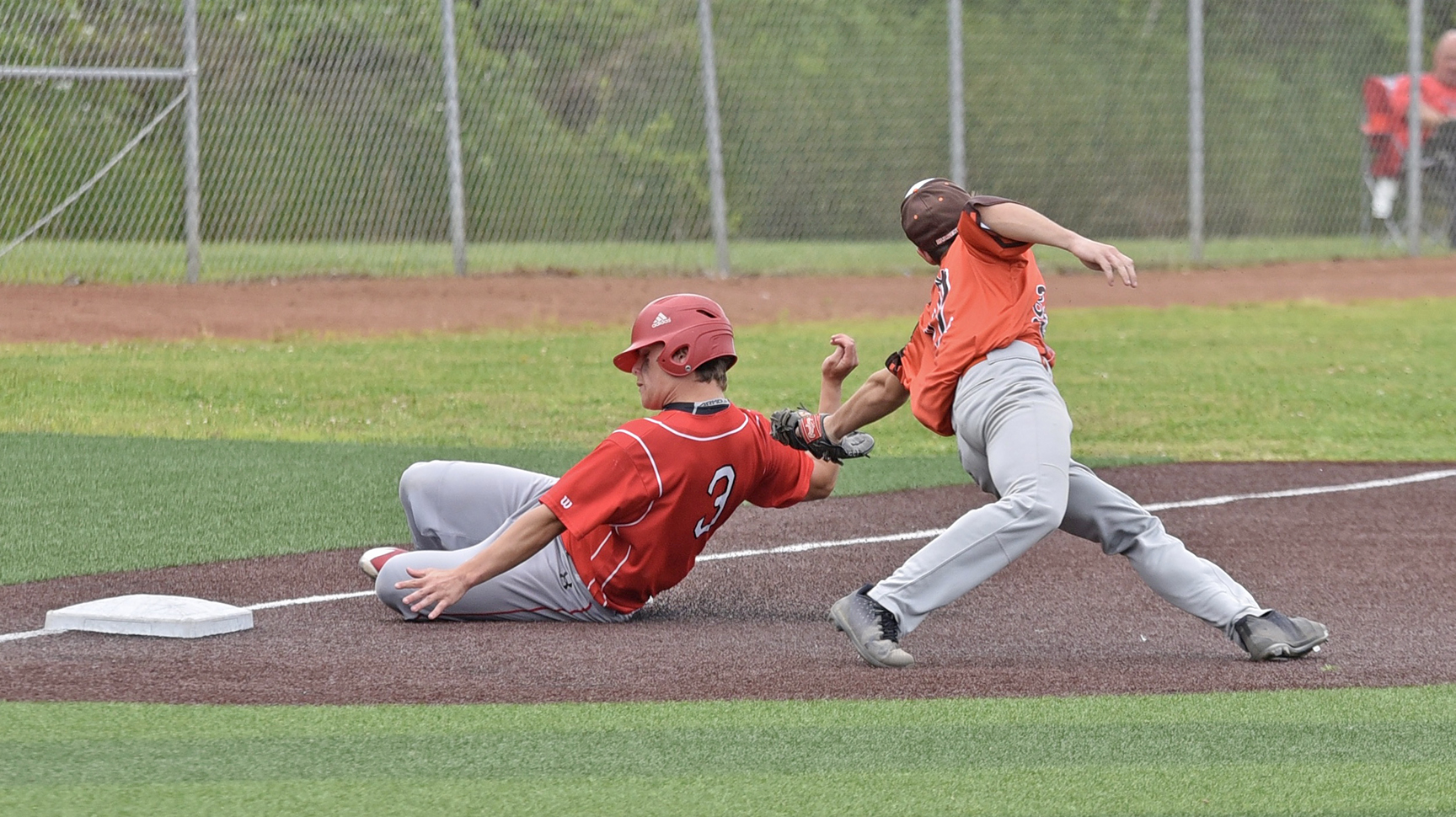 PEDRO — Thanks to the pitching, there weren’t many scoring opportunities.
Thanks to the Rock Hill batters, they made the most of their few chances.
Rock Hill was able to cash in on two scoring opportunities as the Redmen edged the Nelsonville-York Buckeyes 2-1 in the Division III sectional tournament on Wednesday.
“Hankins threw the ball well. Defensively, we played well. We played good defense except for the bunt we mishandled,” said Redmen coach Barry Litteral.
“We were able to get the runs across when we had the opportunity. Both teams played well. They are much better than their record shows.”
Hankins struck out eight and walked three in going the distance for the win.
Nelsonville-York pitcher Reece Robson and Bryce Richard combined to give up only one earned run. They had just one strikeout, two walks and three hit batsmen between them.
The Redmen (18-5) host Alexander at 11 a.m. on Saturday in the sectional finals.
The Buckeyes took a 1-0 lead in the top of the third with an unearned run.
Trey Lewis walked and Bryce Richards was safe on an error trying to sacrifice the runner. Ethan Douglas walked to load the bases and Reece Robson hit a one-out sacrifice fly.
Rock Hill tied the game in the bottom of the inning on an unearned run.
Jordan Griffith singled and went to second when the ball was bobbled in the outfield. Brayden Friend singled the runner to third and then he stole second.
Griffith then scored when Jake Blagg put down a perfect suicide squeeze bunt.
The Redmen got what proved to be the winning run in the fifth.
Nick Blankenship walked, Griffith sacrificed him to second, Blagg had an infield hit to put runners on the corners, Seth Nichols was hit by a pitch to load the bases and Hankins walked to force in the run.
“That was a tough at-bat. Hankins rarely walks and he walked on a full count,” said Litteral.
Rock Hill finished with five hits as Blagg, France, Griffith, Friend and Kaleb Kidd all had singles.
“We hit the ball hard, but right at people. They hit some balls hard that we had to run down. Seth Nichols ran down a couple of fly balls that most people would get to,” said Litteral.
Jacob Chaffin and Christian Wiseman each went 1-3 for the Buckeyes.
Nelsonville 001 000 0 = 1 2 1
Rock Hill 001 010 x = 2 5 1
Reece Robson, Bryce Richards (5) and Christian Wiseman. Logan Hankins and Kaleb Kidd. W-Hankins (IP-7.0, H-2, R-1, ER-0, K-8, B-3). L-Robson (IP-4.1, H-4, K-0, BB-1, HBP-1). Richards (IP-1.2, H-1, K-1, BB-1, HBP-1). Hitting-NY: Jacob Chaffin 1-3, Christian Wiseman 1-3; RH: Jake Blagg 1-2, Kaleb Kidd 1-3, Kadin France 1-3, Jordan Griffith 1-1, Brayden Friend 1-2.