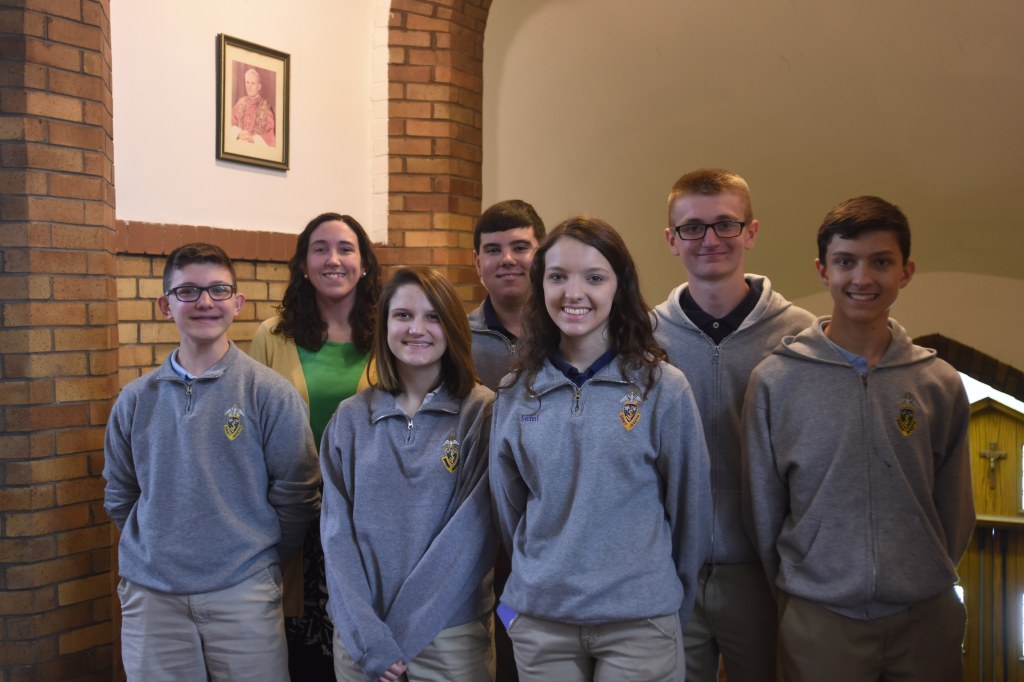 (The Tribune/Mark Shaffer) The St. Joseph Quiz Bowl team recently went to Chicago to compete in the National Academic Quiz Tournament. From left, in the front row, are Nick Pauley, Pola Delaney, Sami Anderson. From left, in the back row, are teacher and advisor Carolyn Enders, Conner Waller, Jarred Johnson and Ben Anderson.

The team’s advisor is history teacher Carolyn Enders. She said the team plays local league teams that culminate in the Iron Master event.

“This year, they decided to try the National Academic Quiz Tournament to challenge themselves,” she said. That means they had to travel to Russell, Kentucky to compete.

Enders said the team enjoyed their first NAQT competition so much, they went to another one in Racine. The students started to spend time after school studying on their own in preparation.

“They ended up winning every single game that we played that day,” she said. “So, we also qualified through that one to go to national competition.”

The nationals were held in Chicago on the first weekend of May.

“We said, ‘Let’s go! It’s an educational experience,’” Enders said. “I don’t think there has ever been another team from this school that qualified for a national quiz bowl competition before, at least not that I am aware of. So it was very special for all the students to go.”

But the timing of the competition also meant that the team would consist of only 9th and 10th graders.

“It was the same weekend as our prom,” Enders said. “So the seniors and juniors attended that instead, and rightfully so.”

In the small schools division, there were 71 other teams for St. Joseph to compete against.

They ended up ranked at 68 out of 72, which didn’t disappoint the team too much.

“We won three games out of 10,” Enders said. “And, for the first time being in the nationals, that was pretty good.”

Enders said that some of the questions that were asked were ones the mainly freshmen team hadn’t even studied yet.

“There were physics questions, freshmen aren’t going to know that. They haven’t taken that class yet,” she said. “We didn’t do as well as we wanted, we had some close games we lost but it was fantastic.”

She said that every student buzzed in and answered a question correctly to get a point.

“And that is a national level competition with only freshmen and sophomores, so that made my whole trip,” she said.

Jarred Johnson, the lone sophomore on the quiz bowl team, said he was a little bit surprised by their success on getting to the national level.

“But as we kept going forward and learning the style of NAQT, I felt our team was getting better and I felt more confident,” he said. “We worked really hard and practiced a lot, so I think our team deserved to go to nationals.”

Conner Waller, a freshman, said it was great to get to go to nationals.

“I was glad we got to do it, because we are a small school and we don’t often get chances to do things like this,” he said. “It was a good experience for us all.”
And both Johnson and Waller are ready to compete again.

“Definitely,” Waller said. “We hope to place higher next year.”