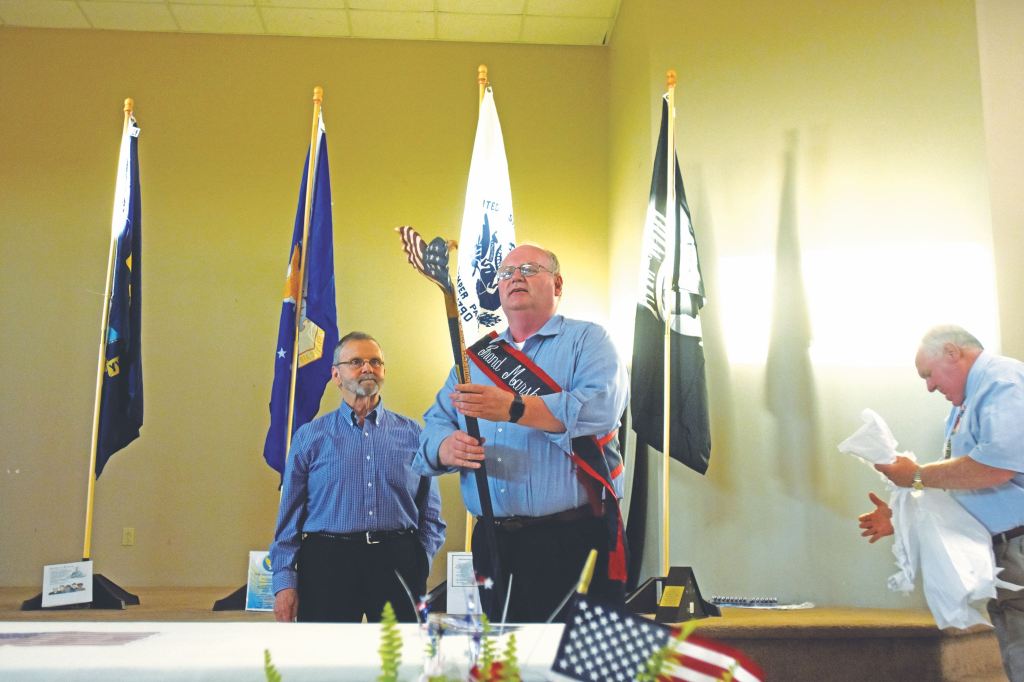 With the Ironton-Lawrence County Memorial Day parade just a few days away, the parade committee held their annual past grand marshal dinner on Tuesday.

“It’s been a great 150 years,” said master of ceremonies, retired Judge W. Richard Walton. “It’s funny, they make a big deal about the Kentucky Derby and the Preakness, and they have been around for 125 years. They are new people on the block.”

He then introduced the night’s speaker, Col. Mike Graese, U.S. Army retired. He retired after 33 years of service and has been the city manager of Ashland, Kentucky since 2017.

“He is an enlisted man who made colonel, which is rare. Very rare,” Walton said.

Graese said that besides his faith and his family, serving in the Army was an honor of his life and he thanked God for his time in the service.

He thanked all the volunteers who made the dinner and the upcoming parade possible.

“None of it is possible without dedication,” he said. “Without your efforts, none of this would be possible.”

He said the parade has gone on for 150 years without fail and that is an exceptional feat.

“(Organizer) Lou Pyles tells me that the parade boasts over 2,000 participants, 12 divisions and over 30,000 spectators, which just boggles my mind,” Graese said.

“It has been enjoyable,” he said, thanking 2019 grand marshal Rich Donahue and the parade committee for letting him to take part. “I hope to do it for several more years and look forward to seeing everyone at the parade on Monday.”

Honorary grand marshal Gary Roberts said it was an honor to participate. He said he had heard about the parade, but hadn’t experienced it before moving to Ironton three years ago.

“It is unbelievable,” he said, adding that he was looking forward to Monday because his two sons, Ryan Roberts and Blake Roberts, both Air Force vets, were going to walk the parade with him. “That will be a great experience. I would like to thank all of you for allowing me to participate.”

Parade grand marshal Rich Donahue said it has taken a lot of work by a lot of people for the past 150 years to put on the Memorial Day parade every year.

“This committee is a family and, like all families, we have a lot of memories and sometimes, we have disagreements,” he said. “But the one thing we all come together on is this parade.”

Donahue had asked for flags that had flown in Ironton during the 2018 Memorial Day parade. He had five on hand to present.

He gave one each to his three children, Cameron Donahue, Bruce Donahue and Caitlyn Marasek.

“It is a little selfish, but my kids have always helped in the parade in one way or another,” Donahue said. “And I wanted to tell them ‘Thank you.’”

The other two flags he gave to a pair of people he said that do so much for the parade every year, Lou and Brent Pyles.

“You just don’t realize how much time they put on the committee to move this parade each year,” Donahue said.

After that presentation, Donahue was given the traditional gift given to each year’s grand marshal, a walking stick carved by Charlie Cook.

“How he can do this year after year, is beyond me,” Walton said. “It’s just a piece of wood, I just don’t know how he does it.”

The walking stick was about four feet long and had an eagle’s head coming out an American flag.

Cook explained, to the laughter of the crowd, that carving a walking stick was easy, you just have to find a piece of wood and simply carve away everything that isn’t a walking stick.

Parade committee Ruby Kerns presented Roberts with a hand made quilt emblazoned with a bald eagle flying through mountains. He hugged her for the present.

“When I met her, I knew she was a special lady,” Roberts said. “And this is why.”

Navy Night will be tonight at 7 p.m. at the Center Street Landing in downtown Ironton. The speaker will be U.S. Navy Lt. Cmdr. E. Taylor George and there will be wreaths laid in the Ohio River in honor of all the service personnel lost at sea.