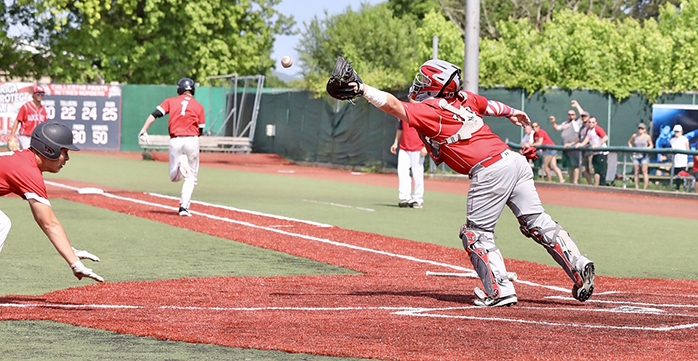 The throw home goes up the first base line forcing Rock Hill Redmen catcher Kaleb Kidd to come off the plate and reach for the ball. The errant throw allowed the winning run to score in the bottom of the eighth inning as Westfall won 6-5. (Photo Courtesy of Tim Gearhart)

CHILLICOTHE — Pitching and defense have been the trademarks of the Rock Hill Redmen all season.
The pitching was there on Friday, but the defense took a holiday as the Redmen were guilty of six errors that enabled the Westfall Mustangs to escape with a 6-5 win in eight innings of the Division III district semifinals.
“It was the perfect storm. Anything that could go wrong, did. We made six errors and we’re still in the game. We battled the whole game,” said Redmen coach Barry Litteral.
“And it wasn’t just one play or one guy. If you take one error away at any point in the ball game, we win the ball game. It just wasn’t meant to be.”
Westfall got the winning run in the bottom of the eighth inning with the aid of an error.
Matt Baemel and Jayden Hammond singled and Keegan Powell drew a one-out walk to load the bases.
Jay Wyman then hit a ground ball to second but the throw home trying to get the force out was wide and Hammond scored the winning run.
Rock Hill (19-6) wasted no time getting on the scoreboard by scoring a run in the top of the first inning.
Jake Blagg singled, Hankins hit into a force play, Kaleb Kidd walked and Kadin France delivered a two-out RBI single.
The Redmen manufactured a run in the third inning to go up 2-0.
With one out, Seth Nichols flared a base hit and Logan Hankins beat out an infield single to put runners at first and second.
Kidd grounded out as the runners moved up a base and Nichols came home on a wild pitch.
Westfall (22-4) got a run in the bottom of the fifth to cut the deficit to 2-1.
Hammond had a leadoff double and pinch-runner Zach Gibson went to third base when Eric Corzatt flied out to centerfield.
Lucas Blackburn hit a pop fly that was dropped allowing the run to score.
A second Redmen error helped the Mustangs score the tying run in the sixth.
With one out, Brayton Felger singled and Sam Frazier reached on an error. Matt Baemel hit into a force play and Felger kept running and came home to score as Frazier’s hard slide into second base prevented any chance of a strong throw home.
With the score 2-2, Rock Hill turned to “small ball” in the top of the seventh to score three runs and appear to have the game won.
“Our players are good bunters. We had 11 or 12 successful suicide squeeze bunts this year. Our kids have done a great job of executing a squeeze play or a sacrifice,” said Litteral.
Landon Smith singled to right field leading off and Nick Blankenship sacrificed him to second base.
Jordan Griffith put down a sacrifice bunt attempt but the ball was thrown away putting runners at second and third.
Brayden Friend walked to load the bases and Blagg put down another bunt that was thrown away allowing two runs to score.
Rock Hill wasn’t done bunting as Nichols laid down another bunt that scored the third run of the inning.
But errors proved costly to the Redmen in the seventh inning.
Corzatt and Blackburn singled to start the inning and Wyman hit into a force play at second. Titan Williams was safe on an error as a run scored.
Connor Spohn then reached on an error as a run scored and Felger hit a sacrifice fly as the tying run scored.
Hankins pitched 7.1 strong innings before leaving due to pitch count rules.
“Logan pitched as well as he has all season,” said Litteral.
Westfall plays Paint Valley-Wheelersburg at 1:30 p.m. on Saturday in the district finals.
Rock Hill 101 000 30 = 5 7 6
Westfall 000 011 31 = 6 7 2
Logan Hankins, Nick Blankenship (8) and Kaleb Kidd. Luke Blackburn, Matt Corzatt (8) and Connor Spohn. W-Corzatt (IP-1.0, H-2, R-0, K-0, BB-0). Blackburn (IP-7.0, H-5, R-5, ER-4, K-xx, BB-xx). L-Blankenship (IP-0.0, H-2, R-1, ER-0, BB-1). Hankins (IP-7.1, H-5, R-5, ER-0, K-2, BB-1, HBP-1). Hitting-RH: Jake Blagg 1-3, Seth Nichols 1-3, Logan Hankins 1-3, Kaleb Kidd 1-3, Kadin France 1-4 2-rbi, Landon Smith 2-4; WF: Jayden Hammond 2-2, Matt Corzatt 2-4, Lucas Blackburn 2-3, Connor Spohn 1-3.