HISTORY LESSON: April 19, 1775 ‘The last of the first’: Minutemen were first to fight for American independence 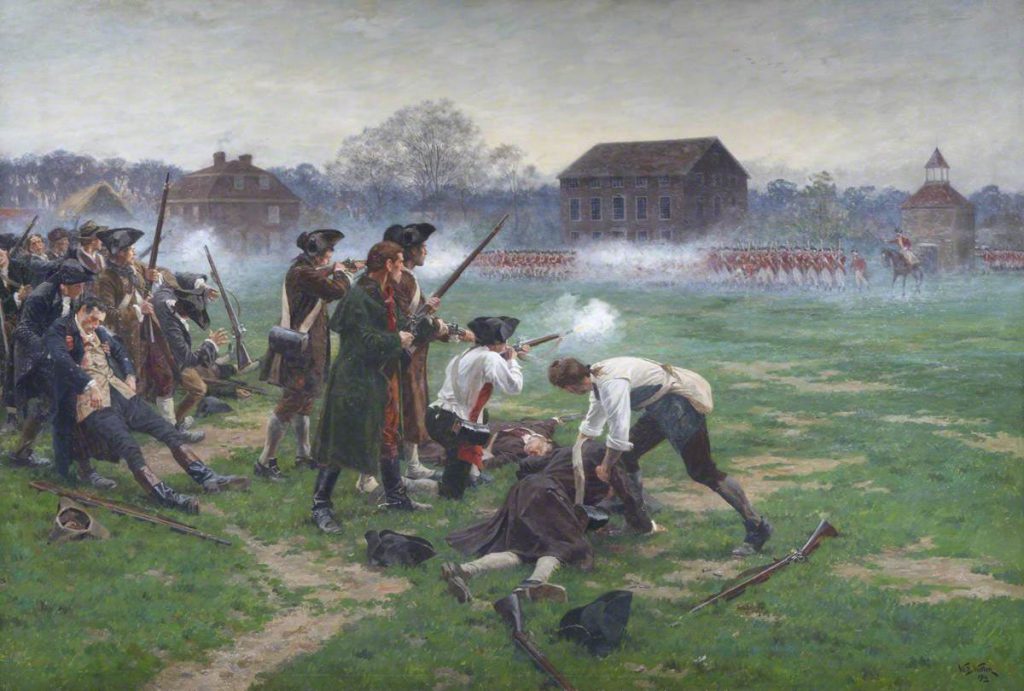 (Public domain) This painting by W.B. Wollen illustrates the battle of Lexington green, which took place on April 19, 1775.

Dr. Joseph Warren has sent Paul Revere on a northern route and William Dawes Jr. on a southern route to warn the countryside that the “Regulars were out.”

Gen. Thomas Gage had secretly planned to send 800 British troops to arrest Samuel Adams and John Hancock (who were hiding outside of Lexington) and to destroy the supplies and equipment the Minutemen had stored at the James Barrett farm outside of Concord.

From Boston, it was 12 miles to Lexington and six more miles to Concord.

Despite secret British planning, word of the march became known to many people in Boston. Revere warned the countryside, Adams and Hancock, but was captured three miles outside Lexington, on his way to Concord, by a British patrol.

Dawes was thrown by his horse and safely returned to Lexington. A third man, Dr. Samuel Prescott, had been courting a lady in Lexington and joined Revere and Dawes outside Lexington. Prescott finished their assigned rides (three miles).

Capt. John Parker had William Diamond beat the call to arms on his drum. At 1 a.m., Parker assembled 130 Minutemen on the Lexington green.

That night, April 18, 1775, was chilly in Lexington. The men stamped their feet and blew their breaths on their hands. At 2 a.m. on April 19, Parker dismissed the company, believing Revere’s warning to be false. If a British army came, Diamond would summon them with his drum.

Around dawn (5 a.m.), the Minutemen assembled a second time on the two-acre triangular green. There were 77 of them. Many had gone back to bed or had stayed too long at John Buckman’s Tavern. The Massachusetts Minutemen were blocking the line of march the British intended to take.

Major John Pitcairn of the British Royal Marines called out to Parker and the Minutemen, “Lay down your arms, you damned rebels, and disperse!”

Parker had told his colonial volunteers to, “Stand your ground. Don’t fire unless fired on. But if they want to have a war, let it begin here.”

With both officers telling their men not to fire, the Minutemen began moving out of the British force’s path of march, but held on to their muskets.

Someone in the village vicinity (not in either army) fired a shot. Pitcairn tried to preserve order, but could not restrain his men from firing at the Minutemen. Only eight Minutemen actually fired at the British force. The British troops were told to fill their cartridge boxes and be prepared to march to Concord. The British fired a victory volley and shouted out three “huzzas” (cheers).

Eight Minutemen lay dead and 10 were wounded. One British soldier was wounded and Pitcairn’s horse had been grazed twice.

The dead Minutemen were buried in a large trench in the graveyard. The trench was covered with dirt clods and then pine and oak branches so the British would think, on their way back, that the graves were a large brush pile.

There were nine Harringtons on Lexington green that morning. Among the nine was a teenage fifer, Jonathan Harrington. He was born in Lexington on July 8, 1757 and, after the opening skirmishes of the war, he left the military and became a farmer.

In 1850, Concord, Massachusetts, held a patriotic celebration and honored the only living five from that Wednesday, April 19, in 1775.

Four of those five passed away and Jonathan Harrington was the last American left of those Minutemen of Lexington-Concord fame.

An era ended on March 28, 1854, when Jonathan died at age 96. He had fathered seven children and survived five of them. He was the last of the Minutemen whose conflict led to the formation of the nation called the United States.

The Revolutionary War was fought between 1775-1783. There were 290,000 Patriot participants and 9,000 deaths that occurred in service. The last Revolutionary veteran was Daniel F. Bakeman, an American soldier who died April 5, 1869, at age 109.

All of these Minutemen had vowed to pick up arms at a moment’s notice if British troops had approached. They had no blue and buff-colored uniforms. They were not paid as Minutemen. They had known responsibilities to their wives and children. Economic priorities related to their shops and farms reduced their wartime availability. However, those Minutemen made an investment in freedom that morning on the village green in Lexington, Massachusetts.