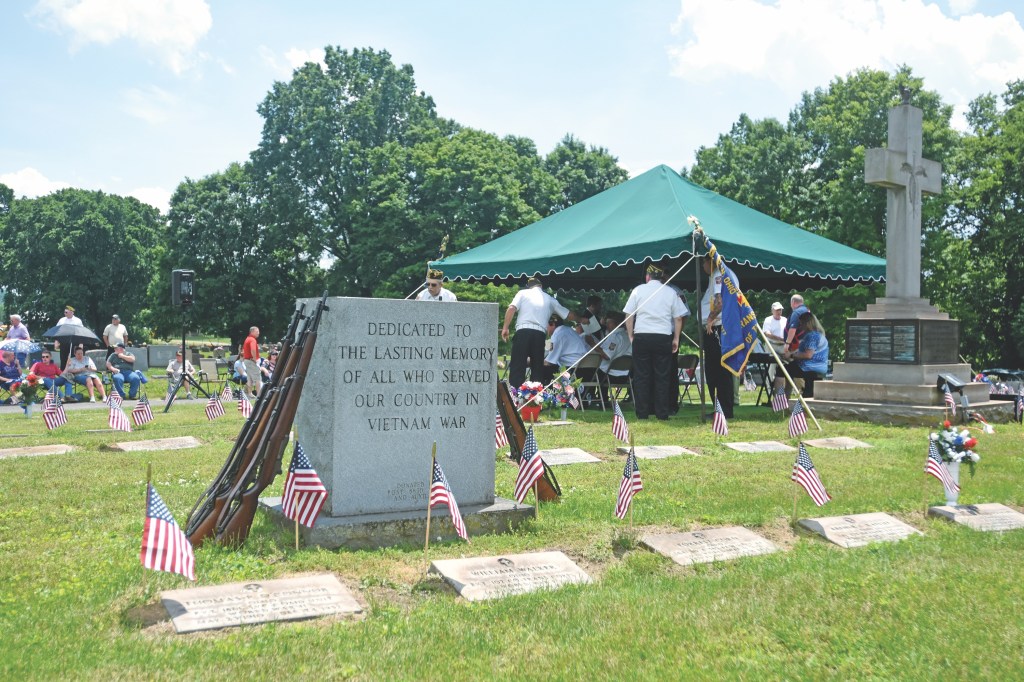 (The Tribune/Mark Shaffer) The rifles of the VFW Post 8850 Honor Guard rest on the marker memorializing those who served in Vietnam.

The sweltering late spring heat did not stop the annual Veterans Memorial Service on Sunday.

In spite of the 90-degree weather and high humidity, around 80 people gathered to honor the fallen military men and women interred in Soldier’s Plot in Woodland Cemetery.

Master of ceremonies attorney Mark McCown said it was as much a tradition to honor those soldiers, sailors and Marines in the cemetery as the annual Ironton-Lawrence County Memorial Day Parade.

“It is an opportunity for Ironton citizens to join together in fellowship, celebrating the individuals who so diligently fought for this nation in all capacities,” he said, adding that the event was the purpose of Memorial Day. “It is a day of remembrance. The cost of freedom has always been high.”

He said they were surrounded by the graves of lives cut short and that any one of the fallen could have been doctors, teachers, scientists, tradesmen or parents.

“Instead, they willingly traded all of that potential to defend our democracy,” McCown said, adding that in the past 243 years, over 1 million Americans have been sacrificed on the altar of freedom.

This year, the speaker was Commander Paul F. Woods, U.S. Navy (retired). He graduated from Ironton High School in 1956 and then went to the University of Louisville on a Navy scholarship before enlisting. He then attended the U.S. Naval Academy and graduated with a degree in electromechanical engineering in 1963.

He served on destroyers and while stationed ashore, he served as an aide to the commandant of the Industrial College of the Armed Forces. He earned a master of science degree from George Washington University. He was assigned to the British Royal Navy to help with the development of the SEAWOLF missile.

After leaving active duty in 1986, he worked with a Washington, D.C. engineering firm and worked on several projects including financial management software, missile systems and mine-resistant vehicles for the troops in the Middle East.

Woods said he remembered that when he was in school, he marched every year in what was then known as the Decoration Day parade.

He said he was proud to be an Appalachian and that Appalachia had given more military personnel on a per capita basis than any other part of the country.

“Our people signed up and went,” Woods said. “And some of them didn’t come back. Some of them are here.”

He said when he thinks of the sacrifices that were made, he thinks not only of those who went and didn’t come home, but those who sent them.

“I think of the mothers who took them to the train station. And looking at them, thought ‘I just used to tie his shoes and now he is going off to war.’” Woods said, adding that their sons came back from boot camp, transformed into a soldier. And then came the wait for the telegram. I can’t imagine what that is like.”

Woods said it was worth watching the TV programs about war to get an idea of what those in the military gave so Americans could be free.

“We are the most free nation in the world and it is that freedom that has given us all the advantages that we have,” he said. “So, when you see a serviceman on the streets, don’t hesitate to thank him for his service. We all appreciate that when we hear it.”