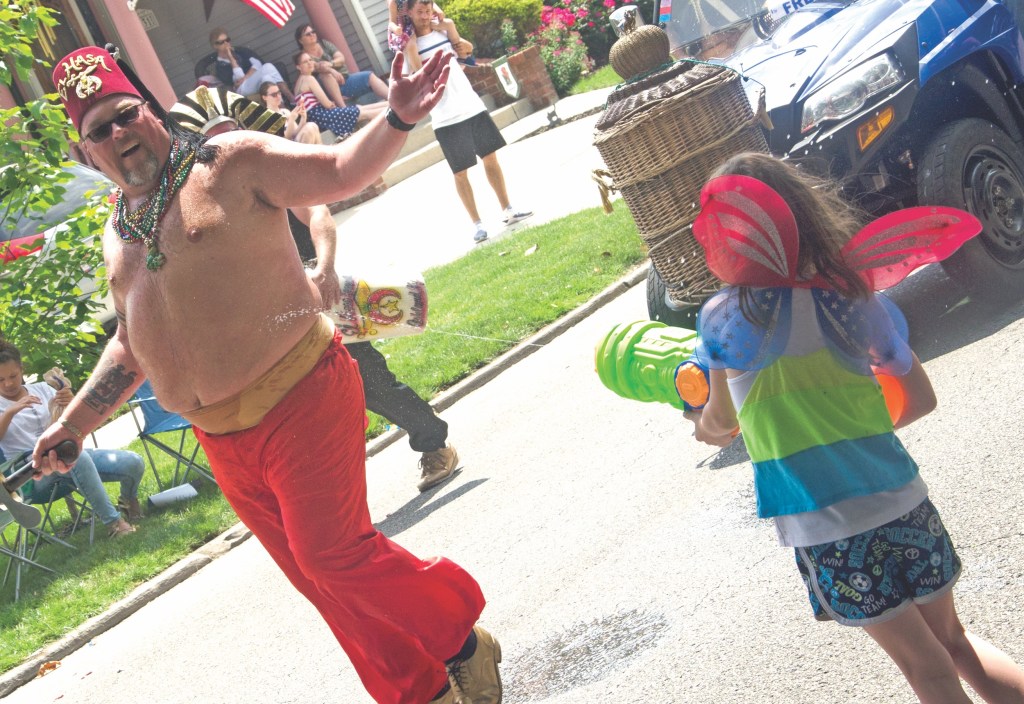 While it may not have been a milestone anniversary, like last year’s sesquicentennial event, that did not mean that the patriotic spirit had diminished in Lawrence County for the 151st Ironton-Lawrence County Memorial Day Parade on Monday.

In fact, it was stronger than ever.

Organizers said this year’s parade drew a record attendance, with a crowd size estimated at around 35,000 people.

“I’ve never seen anything like it,” Lou Pyles, who, along with her husband Brent, has worked for years on the parade committee, said.

As the commander of the Third Division of the parade, she said she saw firsthand how thick the crowds were, with people five rows deep on some streets.

“We’re thrilled by this,” she said.

“We’ve had a lot of participation and people out,” he said. “This has been a particularly good parade.”

Donohue estimated that it would take about three and a half hours for the parade’s 12 divisions to march the route through Ironton.

He was joined in the parade’s leadership by James A. Rowe, who served as parade commander, and Gary Roberts, who was honorary grand marshal.

The parade kicked off with a military flyover and then the color guard from VFW Post 8850, followed by the playing of “Taps.”

The Million Dollar Marching band from Ironton High School provided the first march of the event and, from there, the first divisions of the parade were centered around veterans groups and service personnel, as well as paying tribute to the fallen, prisoners of war and those missing in action.

Many schools from the region, including South Point, Dawson-Bryant, St. Joseph Catholic High, Symmes Valley and Coal Grove, took part in the event, whether it was through marching bands, flag corps and cheerleaders, or, in the case of Ironton Elementary, who made a float centered around the city’s history, paying tribute to the 100th anniversary of the Child Welfare Club, the Ironton Tanks as well as the industry of the area.

Along the route, many popular mainstays of the parade made a return, such as the El Hasa Shriners, whose Oriental Band remains a crowd favorite. They were accompanied by the group’s signature small cars and followed by the members of the El Hasa Hillbilly clan, who gave the hot crowds some relief with a spray from their water guns.

The Joe Freeman Band pleased many in the crowd with live bluegrass and classic country songs from their float, while the Yvonne DeKay School of Dance was again back in the lineup, with its students, dressed in World War II era styles, dancing to a recording of Rosemary Clooney’s “G.I. Jive.”

In addition to the regulars, the parade saw some unique new entries.

Lawrence County Commissioner Colton Copley organized a float, featuring his family and friends, with children portraying patriotic symbols of America, such as Rosie the Riveter and the Statue of Liberty.

Community involvement was strong for this year’s event.

Near the end of the route, members of Christ Episcopal Church were handing out water to the crowds and parade participants.

“This is our second year doing this,” Sallie Schisler, pastor of the church, said. “The scriptures tell us to give our brothers and sisters a cool drink.”

She said they had given out about 800 bottles and that they parade was a great way to connect with the community.

“And our location is perfect,” she said.

Veterans from several conflicts took part in the march, including those from Vietnam and Korea or, in the case of Forest Wireman, World War II.

A recipient of the French Legion of Honor, he took part in the invasion of Normandy which marks its 75th anniversary next week. A recipient of four Bronze Stars, he was honored with a float in the Second Division.

In addition to honoring veterans who were present, the parade centered around paying tribute to those who did not return home.

That sentiment could be found on Sixth Street, where Ray Fields, a Vietnam Veteran and graduate of Dawson-Bryant High School, was watching the parade go by, while holding a sign reading “in honor of Johnny Russell.”

“We both went to Coal Grove High School,” Fields said. “And we were in Vietnam in 1969. Johnny made the ultimate sacrifice and I came home to honor him.”

He has been bringing the sign, dedicated to his fellow member of the 9th Infantry Division and made by his granddaughter, to the event for several years.

He said the purpose of his attendance was simple.

“It’s all about Johnny,” Fields said.