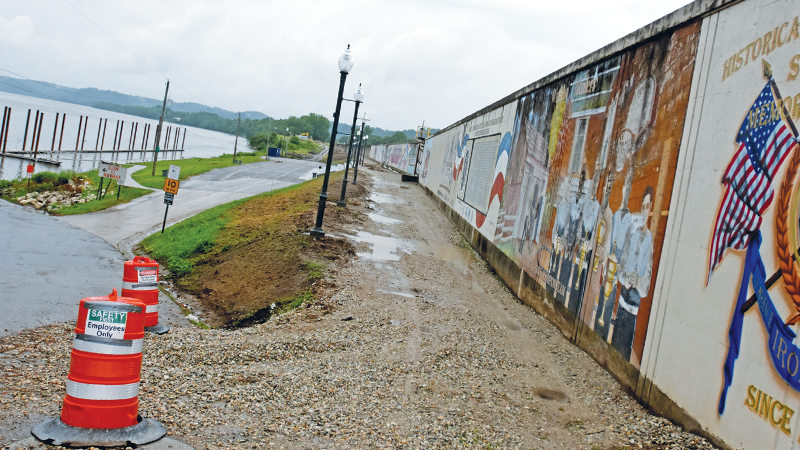 Anyone going to the Center Street boat landing in Ironton has noticed some work being done.

Just in time for Navy Night last week, the old seating cut into the hillside has been replaced by new concrete and brick seating.

And the top of the hill by the floodwall has been cut down and leveled to make a new walking trail. There is also new pole lighting. And once the trail is done, it will have blue LED ground lighting to mark the pathway at night.

She said the project is part of a grant from Clean Ohio and the Ohio Department of Natural Resources. The project cost is around $1.5 million and is expected to be done by mid-summer.

“It is part of the three-part trails program we are incorporating around Ironton,” she said.

The first part of the trail was at Storms Creek.

The goal is to have a walking and biking trail.

Keith said the goal is to bring people in. People will be able to ride their bikes on the trail rather than on the streets or to walk and not worry about traffic.

The concrete and brick seating is part of creating an amphitheater space for bands or events like Navy Night.

“We are hoping to pave that street as well,” Keith said, adding the goal is to level the space off so when podiums or seats are set up, people will be able to walk through there a little less awkwardly. “I felt myself almost stumbling on Navy Night and I thought to myself that we do have some money left over. But everything we do there has to tie into the trails. We are trying to see what we can do down there to make it more accommodating for that.”

Keith said she has already gotten a positive response from the people at Navy Night.

“They were excited to be able to use the riverfront and enjoy the Ohio River,” she said.

The riverfront space will be used this summer during the Ohio River Revival on June 29.

The family event will have music, vendors and inflatables for children.