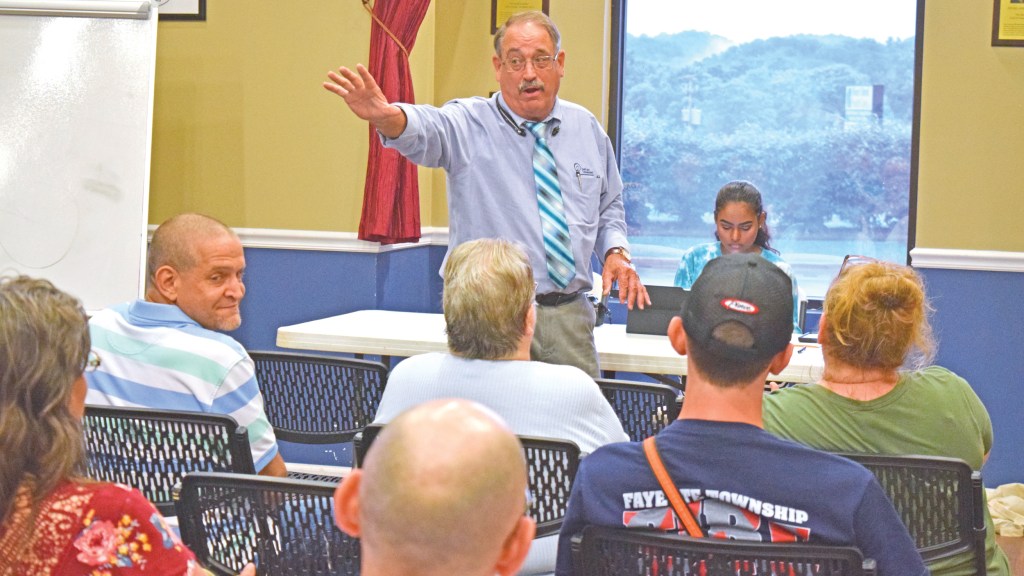 The Tribune/Heath Harrison Dr. Dave Lucas, president of the Lawrence County Rural Water District, speaks at a public information meeting at NECCO in Burlington on Thursday.

Phase I would focus on Fayette Township and Macedonia Hill

BURLINGTON — While water service is something most take for granted, there are still several areas in Lawrence County that do not have it and a meeting on Thursday was aimed at changing that.

The Lawrence County Rural Water District was established in August 2018 to bring running water to all underserved areas of the county. The public information session, which took place at NECCO in Burlington, brought officials from the state to the region to discuss the status of service in the county and to share plans for going forward.

Dr. Dave Lucas, who serves as president for the district, said their aim is to bring water service to the county in three phases, with phase one focusing on Macedonia Hill and Fayette Township. Other areas in need of service that they intend to work on are Rome Township, Symmes Valley and Winsor Township.

“You deserve running water,” Dave Lucas said to the room, which was full of residents from affected areas. “It’s not going to be easy, but I’m not afraid to fight. This is not about politics. It’s about you, so you can lift a glass of water that does not have whatever floating in it.”

One of those speaking at the meeting was Kurtis Strickland, of the Rural Community Assistance Program.

An Oak Hill resident, he said he understood the problem, having lived in the country and been without service for some time.

“We’re going to work our hardest to try to get you water,” he said, adding that RCAP and Hecla Water would soon me mailing surveys to more than 50 families in the Fayette and Macedonia areas.

These surveys would gather information on who has water, what is spent on water and how much people would be willing to pay for service.

Lucas and Strickland said the surveys would be important in getting funding, particularly with Community Development Block Grants.

“It’s very important to fill it out,” Strickland said.

He said he represents the non-regulatory side of the agency and works to assist individuals and businesses with compliance and financial needs with water and wastewater systems.

Rouch said he met with Lucas in January in Columbus, followed by a second session, which focused on coming up with an action plan.

He said tackling Macedonia Hill be a challenge.

“It will take some infrastructure getting water up that hill,” he said of installing water lines and valves for the area. “There’s some engineering to it. It’s a fairly big construction project.”

Fayette Township fire chief Tim McMaster said bringing service to Macedonia Hill would help with firefighting efforts, where they have to rely on tanker’s presently.

He said if a line was put in, then he could apply for grants for hydrants, though Rouch said the type of line to support hydrants would require a costlier project. But he said they can work on a way to get water to the system.

Lucas said the involvement of state officials was reason for optimism.

“We are moving forward and now you have a group of people in your corner,” he said. “I’m telling you this is going to happen.”