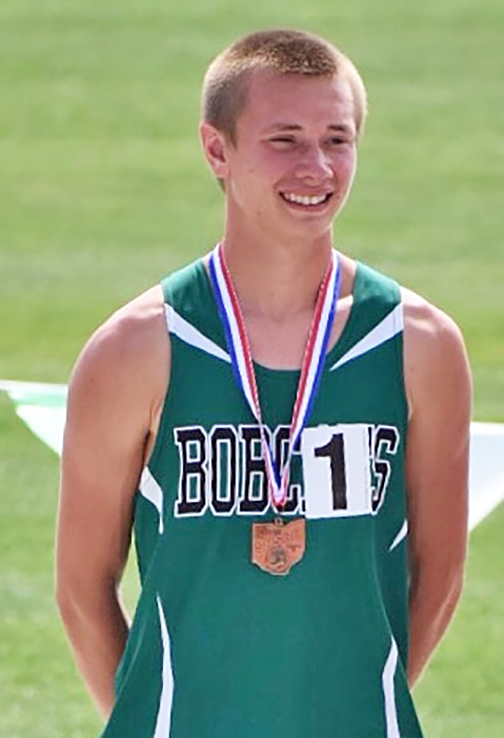 Green Bobcats’ Zach Huffman is all smiles after getting his medal for placing 8th in the Division III 300-meter hurdles at the state meet last Saturday.

COLUMBUS — When Zach Huffman walked onto the track at Jesse Owens Memorial Stadium, he might have been a little intimidated.
Not because it was the Ohio High School Athletic Association Division III state track meet. And not because some of the best 300-meter hurdlers were lining up beside him.
He was actually running on a rubberized surface with nine lanes.
You see, the Green Bobcats’ senior doesn’t have the benefit of a track at the current high school. Huffman actually trains in the school parking lot.
But none of that — not even an injury that sidelined him most of the season — stopped Huffman from placing eight in the state meet on Saturday.
Huffman posted a time of 40.43 seconds in the finals, barely beating his 40.44 time in Friday’s preliminaries.
“It was intimidating while sitting in the bleachers watching the events before my race. Once I got on the track and began warming up, all the nerves went away. It was definitely awesome. I’ll never forget it,” said Huffman.
“Everybody from my dad and my coach said, ‘you’ve got nothing to worry about. You’re at the state.’ I never thought I’d be there. I was hurt all season. It blew my mind to qualify for state, but I wanted to place.”
Green head coach Randy Smith said Huffman was ranked 14th coming into the state meet but they refused to be intimidated.
“Zach is an extremely hard working and coachable kid. We set a goal of making the finals and then getting on the podium,” said Smith.
“He has faced adversity his whole career. He trained on the parking lot because we don’t have a track.”
“Open meets are a large part of my training practice.,” said Huffman. “We only have six or seven hurdles. With the 300 hurdles, I can’t practice that much because I can only set up two or three hurdles before we run out of room to run.”
The worst thing that hampered his training was an ankle injury while playing basketball with his brother Ethan on a court at his home that sidelined him until a small meet at South Webster.
Next up on the schedule was the Southern Ohio Conference meet.
“(Ethan) went up for a layup I went up to block him. I came down on the concrete and sprained my ankle. I was in a boot for four or five weeks,” said Huffman.
Following the league meet, Huffman then ran in the district and regional meets, thus making the state meet only his fifth competition of the year. He is the first Green athlete to reach the state meet in 23 years and only the third to ever place.
Huffman — whose mother Missy Carver Huffman also ran in the state meet for Green as part of a relay team — set and broke his own school record in three straight meets this season. The current record is now 40.3 seconds.
“I broke the record in the SOC meet and then kept making it faster,” said Huffman.
Besides the 300 hurdles, he finished seventh in the 110-meter hurdles at the regional meet with a 15.92 time.
Huffman was All-SOC as Green won the conference cross country title again and he was a member of the basketball team.
The state meet was nearly a family affair. Ethan Huffman leaped 6-1 and was fifth in the high jump at the regional meet but just missed a state trip with two misses while South Gallia’s Kyle Northrup did not miss the height.
Rock Hill’s Baker in 800
Rock Hill Redmen junior runner Eli Baker ran in the Division II state track meet and finished 17th in the 800-meter run.
Baker — who finished third in the regional meet — had a time of 2:01.20.
The winning time at the state meet came from Blake Lucius of Shelby with a 1:53.58 clocking.