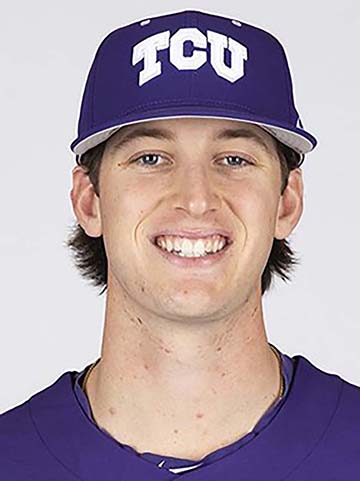 FORT WORTH, TX — Nick Lodolo said he’s the kind of pitcher who throws a lot of strikes. He also said he doesn’t plan to strike out as professional pitcher.
The Texas Christian 6-foot-6, 205-pound lefthander will begin throwing strikes in the Cincinnati organization after being the Reds’ No. 1 pick and seventh overall in the Major League Baseball first-year player draft on Monday.
“I’m a guy who throws a lot of strikes. I command three pitches very well. I pitch a lot off my fastball and move it in and out,” said Lodolo who added that he doesn’t even consider failing at the next level.
“I’m not worried about that at all. I personally don’t think so. I think in any class I can be a top pitcher. I believe in myself.”
The Reds’ president of baseball operations Dick Williams and the scouting staff led by director of amateur scouting Brad Meador also believe in the TCU junior.
“Nick is a tall, left-handed pitcher that has a plus mix of pitches and durability to start in the big leagues,” said Williams.
“He was a first round pick out of high school who has only gotten better with three years of college experience. Playing in a top conference, we believe he was one of the top college pitchers available in this year’s draft and we’re thrilled to add him to our organization.”
Lodolo, 21, was named All-Big 12 first team and was listed as the top pitching prospect in the draft by Baseball America.
In 16 starts this season, he had a 2.36 earned run average with 131 strikeouts over 103 innings. Held opposing batters to a .203 batting average and he posted an impressive 0.98 WHIP.
Lodolo said his decision to attend college instead of accepting a contract out of high school was a wise and important decision.
“Honestly, I really wanted to go to school and I knew that if I signed out of high school I was not going to go back to do four years of education and education was really important to me and my family,” said Lodolo who is a communications major.
“I wanted to get the college experience. I wanted to experience college baseball and what college has to offer and how getting out there and growing up on my own in the college environment. TCU has been really awesome to my family and to me.”
A native of Laverne, Calif., located 20 miles east of Pasadena, Lodolo is the highest major league draft pick ever selected from TCU. He was originally drafted by the Pittsburgh Pirates with the 41st overall selection in 2016.
Besides the education and maturity aspects of college, Lodolo said it helped him on the field as well as off.
“(TCU) puts you in an environment where they set you up to succeed. You have all the resources you can imagine,” said Lodolo.
“The biggest thing I’ve learned at school is the mental thing and learning how to pitch. In high school, you don’t have to learn how to pitch and how to slow the game down. Just getting that strength has helped me develop as a pitcher.
Lodolo attributes a lot of his development and success to TCU pitching coach Kirk Saarloos who spent seven years in the major leagues including 2007 with Cincinnati.
“He likes to tell his stories from the major leagues. He’s been phenomenal with me since the day I got here. I enjoy coach Saarloos. He will help you in any way you can image. He’s taught me so much and learning so much about myself as a pitcher,” said Lodolo.
With the draft behind him, the newest Reds’ prospect is anxious to move forward with his baseball career.
“I’m ecstatic for the opportunity. From just the little bit of knowledge I have from talking with the area scout and the scouting director, I couldn’t be more excited, especially to get going and get up there as fast as I can and help out,” he said.
In the second round, the Reds drafted 6-4, 215, right-handed hitting shortstop Rece Hinds of IMG Academy in Florida.
Hinds is a player with elite power and a very strong throwing arm. Although he has raw bat speed, he has a long swing and is prone to a lot of strikeouts.
Hinds is a good baserunner who can also play one of the corner outfield positions. His struggles with footwork will likely have the Reds moving him out of the shortstop position and probably to third base.